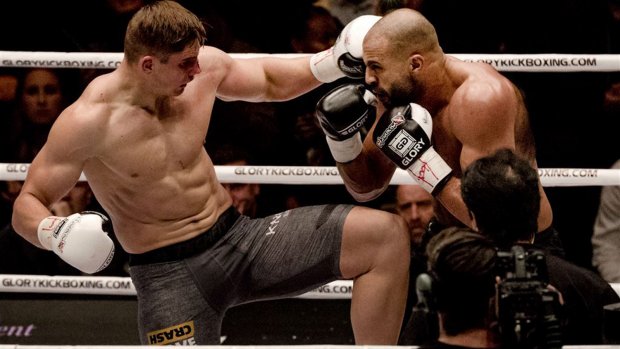 Kickboxing is a martial art with roots deep in Ancient Asian arts, such as Muay Thai and Karate. But, the combat sport we know today hasn’t started its development until the 1960s. It quickly evolved and became one of the most popular striking martial arts in the world.

Different styles and techniques were developed during that period, but the basic rules have been unified worldwide, making Kickboxing a global sport. Over the years, there have been many incredible fighters, many of whom made a significant mark in martial arts history.

However, due to the differences in style and the sport’s development over the years, it’s hard to rank fighters and decide who’s the best of all time. That’s why we made a list of the ten best Kickboxers of all time, not ranking them in any particular order. We’ll add some honorable mentions, too, because there are so many fighters that deserve the honor of being on this list.

When thinking about Kickboxing, the first fighter that pops to mind is the legendary Dutch heavyweight Ernesto Hoost. Born on July 11th, 1965, many consider him the best Kickboxer of all time, and his accolades certainly corroborate those claims.
He was at his peak in the 2000s, when the competition was probably the toughest, racking up four K-1 Grand Prix Championships before retiring in 2006. He then briefly returned to the ring in 2014, at the age of 48. He won the vacant WKO World Heavyweight Championship against a rival legend Peter Aerts.

He ended his phenomenal career with an overall score of 99 wins and 21 losses. Sixty-two of those wins came by knockout, too. He had some incredible battles over his career and defeated some of the best Kickboxers of all time.
To win his four K-1 titles, he defeated Mirko Cro Cop Filipović, Stefan Leko, Mark Hunt, Jerome Le Banner, Ray Sefo, and many others.

One of the most devastating high kicks in the history of martial arts belongs to the legendary Croatian fighter, Mirko Cro Cop Filipović. He was born in 1976 and had a long, diverse career in martial arts before he retired in 2019. The reason for his retirement was due to health concerns after Cro Cop suffered a stroke.
Filipović has competed in several different combat sports, including Kickboxing, Karate, Boxing, and MMA. His mixed martial arts career was the longest and probably where he made the most fame, but when looking at his Kickboxing resume, it’s clear that he was one of the greatest fighters of all time in this sport.

In his first professional Kickboxing fight in 1996, he unanimously defeated Jerome Le Banner in the opening battle of that year’s K-1 Grand Prix. That was a fantastic accomplishment because Le Banner was one of the last year’s finalists, and it was clear the Croatian will make a mark in the sport. He lost to Ernesto Hoost in the next round but still put up a good battle.

He went on to finally win a K-1 Grand Prix in 2012 after being the runner-up two times. He beat the great Mike Bernardo in 1999 to get to the finals, only to get defeated by Hoost again. Bernardo would avenge his knockout loss to Mirko the next year, where he stopped Filipović in the K-1 finals. Through his Kickboxing career, he defeated the greats such as Ricky Nicholson, Musashi, Mark Hunt, Remy Bonjasky, Peter Aerts, Ray Sefo, and others.

His left high kick remains one of the deadliest strikes in martial arts history, which he used to become a PRIDE and RIZIN champion in MMA. He holds the record for most head kick knockouts in PRIDE history.

Known already as one of the greatest Kickboxers of all time, Rico Verhoeven is the epitome of endurance and resilience. Born in 1989, the incredible heavyweight Dutch won the prestigious Glory Kickboxing title in 2013 and is still holding it to this day. He became a champion by defeating the legend Peter Aerts and never looked back, gathering a 58-10 record.

He was very young when he started his career, knocking out Wilbert Dam when he was just 16 years old. His most prolific victories came later, though, defeating Hesdy Gerges, Gokhan Saki, Daniel Ghita, Badr Hari, Benjamin Adegbuyi, Anderson Silva, and others.
After winning the title in 2013 by defeating Ghita in the Glory Heavyweight Championship tournament, he’s defended it a staggering nine times. His biggest rival (at least in the media) is the Moroccan superstar Badr Hari. There is a constant debate about which of the two is the greatest Kickboxer today. But, Rico has won both their contests in 2016 and 2019.

It’s incredible that almost everybody has Verhoeven on their all-time great list because he is just 31 years old. It’s clear that he can have a full decade of dominance more, as many Kickboxers keep fighting way into their 40s. He was named Fighter of the Year by different authorities four times already and will probably rack up a few more of those accolades in the upcoming years.

If every sport had its notorious bad boy, Kickboxing would have Badr Hari to claim that title. The Moroccan superstar is known for his temper and troublemaking outside the ring. But, he’s a force to be reckoned with when he steps into the ring.

He was born in the Netherlands in 1984 but is fighting out of his native Morocco. He is one of the most active Kickboxers of all time, although injuries and suspensions made him appear in matches a lot less over the last few years. He racked up a staggering 106-15 record in the ring, defeating legend after legend on his path to greatness.
His first K-1 Championship came in 2007, and he defended the title the next year again. Later, he was the K-1 Grand Prix runner-up two times and won championships in other organizations.

It wasn’t that rare to see Badr getting fines, suspensions, and disqualifications through his career. He had several run-ins with the law, too, but it never seemed to affect how good he was in the Kickboxing ring.

Nobody in the world would go against Badr Hari and be a favorite to win during his peak fighting years. He destroyed Gokhan Saki, Stefan Leko, Ray Sefo, Peter Aerts, Semmy Schilt, and Alistair Overeem. He would’ve had Remy Bonjasky on that list as well, but he was disqualified after he knocked the Dutch out, as his temper got the best of his as he stomped on Bonjasky while he was on the ground.

His fights rarely finished with a decision, as he has 92 knockouts in his 106 wins, making him one of the deadliest fighters to ever get into a Kickboxing ring.

Born in 1970, Peter Aerts is one of the longest active Kickboxers of all time. Like Mirko Filipović, he is also known for his incredible high kick knockouts, which is why he got the nickname The Dutch Lumberjack.

The legendary fighter is still not officially retired from fighting even though he is 50 now. He’s still a dangerous opponent to young stars, but it would be nearly impossible to keep the level he was at for this long. He’s won the K-1 Grand Prix three times and was a runner-up several more times.
His first K-1 Grand Prix victory came in 1994, where he knocked out Patrick Smith to get the title. The next year was one of his most successful career years, where he defeated the great Ernesto Hoost and Jerome Le Banner back to back to defend his K-1 Grand Prix. He also defeated Sam Greco and Mike Bernando the same year. He’s also won the WMTA World Heavyweight Muay Thai Championships a whopping six times and racked up numerous accolades along the way.

There’s almost no great fighter that Aerts hasn’t faced. Apart from the ones we already mentioned, he fought Musashi, Ray Sefo, Mirko Cro Cop, Stefan Leko, Semmy Schilt, Remy Bonjaski, Alistar Overeem, Gokhan Saki, Rico Verhoeven, etc. He has 106 wins and 35 losses in his career and will probably add a few more fights to that resume before he eventually officially retires.