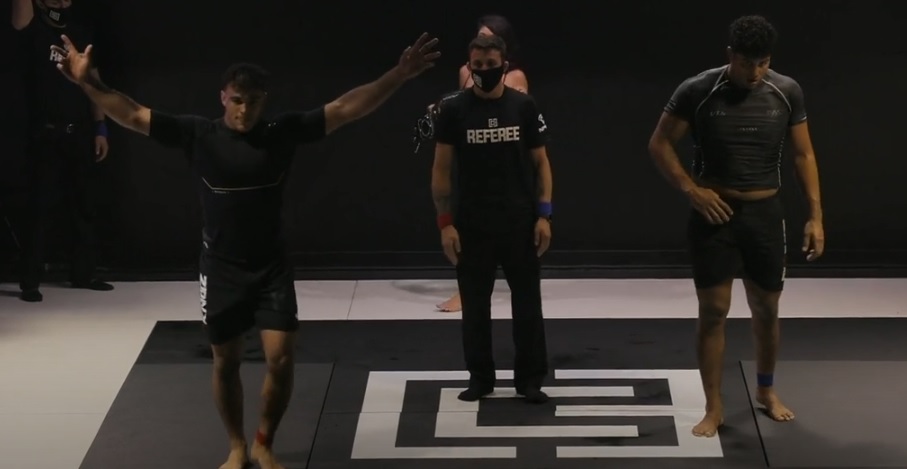 The 2021 debut for 3rd Coast Grappling packed the mats with hours of exciting matches, with some of the best athletes jiu-jitsu has to offer going head-to-head in a series of superfights and an eight-man absolute tournament at 3CG 6.

Rounding off the evening was a main event superfight between teen superstars Mona Bailey and Trinity Pun, while Kaynan Duarte and Victor Hugo faced off in the tournament finals to see who’d go home with $15,000 and who’d walk away with $5,000.

Here are the full results from the main card:

Bailey immediately pulled guard, getting butterfly hooks in and going for a sweep before being forced to defend a footlock attempt from Pun. After escaping immediate danger, Bailey then countered with a footlock of her own. Pun released her opponent’s foot in favor of defense, trying to come up to her feet before Bailey went belly-down. Pun managed to get out of danger from Bailey’s dangerous belly-down position and worked on keeping her weight over her opponent, willing to run out the clock until overtime offered more opportunities.

In overtime, Pun began in Bailey’s closed guard. As Bailey went to attack an arm, Pun responded with a series of slams. Bailey cut an angle and went for an armbar from guard, eliciting another slam from Pun. Pun managed to get her arm out of danger, getting back into Bailey’s guard. Pun worked in one more slam before time ran out, but neither competitor was able to get the points or submission needed to prevent the result from going into the judges’ hands.

Mona Bailey was declared the winner by referee decision.

Hugo kicked off the action by pulling guard, and Duarte countered with a pass attempt that transitioned to a leg attack. Hugo escaped danger and went for a leg attack, with Duarte countering with another leg attack of his own. Duarte stayed persistent with his passing and leg lock attempts, and the competitors returned to the feet briefly before Hugo pulled guard again. The clock wound down with both athletes battling it out in their familiar game of retention vs. passing, and the match went into overtime.

Overtime began with Duarte in Hugo’s closed guard. Duarte stayed low, and Hugo went for a kimura. With just under three minutes to go in overtime, Duarte stood up, and Hugo attempted a sweep. Ultimately, though, he was forced to go back to playing open guard. Duarte stepped between Hugo’s legs, and Hugo turtled up to defend against a back take. Duarte got one hook in, still low on his opponent’s back, and Hugo rolled to defend. The athletes got too close to the edge of the stage and were reset with Duarte again trying to pass Hugo’s open guard. Hugo locked in a calf slicer, but wasn’t able to finish it before time ran out. With no points on the board, the match went to referee decision.

Kaynan Duarte was declared the winner via referee decision and took home the $15,000 first-place prize.