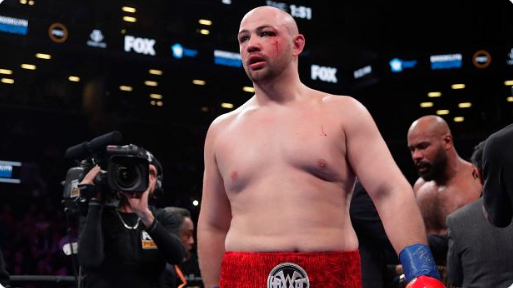 You’d be forgiven for forgetting Adam Kownacki’s last fight — in fact, he would prefer it that way. The world has changed a lot in the 13 months since Robert Helenius took his unbeaten record inside the Barclays Center, but the 32-year-old convinces me that his ambition burns even brighter than before.

Last March, “Babyface” suffered his very own “Nordic Nightmare” in front of partisan Brooklyn support. A dominant fourth round from the hard-hitting, yet faded Finn saw an end to the argument in dramatic fashion. Talk of title shots — along with his punished eyes — were put on ice as the inquisition began.

“Boxing’s hard, man,” he tells me candidly from Florida, where he is currently considering relocating to with his new and growing family. “In reality, you’re only as good as your last fight, and mine was a knockout loss. But I am determined to come back and prove that I belong with the best in the division. If I beat Helenius in the rematch I believe I am right back where I want to be.”

Where he wants to be is back amongst the conversation in the upper echelons of the heavyweight division. The pandemic punctured the chance of a rematch with Helenius last month, with the summer now targeted for Kownacki to seek revenge. He’s at ease reflecting on his solitary professional loss and understands where improvements will need to be made.

“I’ve been trying to keep my weight down during the last year,” he explained. “At the moment I am weighing around the same as I was for the Helenius fight, so once we get a fight date confirmed, I can take the training up a notch and get down to a more comfortable weight.

“Looking back, I needed to be a lot more patient in that fight. I should have stepped back and tried to recuperate rather than rushing back into the fire. But that’s what I do; I’m a fighter. It’s the way I am and I was eager to get back onto the front foot.

“This wasn’t the smartest thing to do especially against someone of the size and with the power of Helenius. He hit me with a strong, good shot and there wasn’t anything I could do about it. I’ve learnt from this. I don’t always need to go rushing in. I should have stuck behind a double jab after I was buzzed.”

Did the loss hurt? Of course it did. Kownacki is a proud fighter and regrets the undoing of his previous good work in the division.

“It hurt bad. I was in line for a title fight and in the top five of most of the sanctioning bodies and then it was like everything that I achieved in the past no longer mattered. That sucked. But with the pandemic hitting and my newborn son being around it acted as a good distraction for sure.

“Now I’ve had time to reassess and improve. Things like getting behind the double jab, head movement and upper-body movement, not always walking straight into trouble etc. I took my eye off the game in the first fight – camp wasn’t the best with my son arriving, I was just going through the motions.”

If for some reason the Robert Helenius rematch isn’t next, Kownacki understands that he will have to take some deep dives in the division if he is to regain his stock. Dillian Whyte’s name has been mentioned recently as a possible opponent for “Babyface” and he’s keen to ignite this flame with an old friend.

“Dillian Whyte is a good dude, man. That fight would be a brawl. I trained with Whyte in one of Wladimir Klitschko’s camps so I know him well. We are both ambitious guys so it’ll come down to who deserves it the most.

“Dillian throws bombs and comes to fight. He’s trying to take you out with every shot. Sometimes he’s struggled to get up for certain fights – struggling in camps especially versus Mariusz Wach – but I’m sure that’s something he’s now put right.

“This could go down in history, like a Gatti-Ward sort of slugfest. We both want title shots, so if we have to fight each other then so be it.”