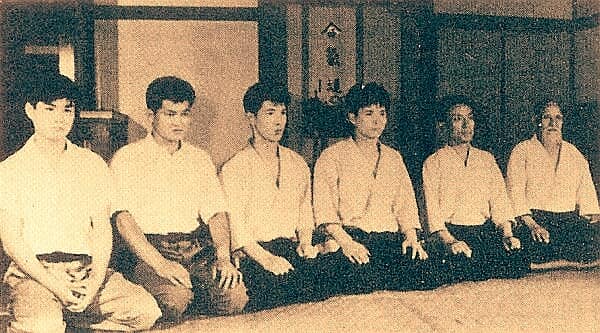 Yokomen uchi is a strike to the side of the head. Like shomen uchi, this is mainly a sword attack. But the shihonage technique is the same on unarmed side strikes. In the basic sword style attack, the forward hand is the striking hand. The attacker should not shift hands in the attack, because it is very impractical indeed with a two-handed sword.

Shomen uchi attacks usually start with an aihanmi relation between tori and uke, defender and attacker, which means they have the same leg forward – right or left. But in yokomen uchi, this is reversed, gyakuhanmi, so that opposite feet are the closest – right to left or left to right. That’s the basic initial stance in aikido practice.

In both omote and ura shihonage starts in the same way. You take an irimi step to the other side of the attacker than the one of the hand he or she attacks with. Get in close to the attacker, to avoid the strike even if it is armed, like with a knife. At the same time as you step in, you make a double-armed parry. The hand by the attacker’s face is atemi, the strike aikido mainly uses for distraction and to limit the attacker’s ability to counter. It can be done as an uraken strike with the back of the hand (the knuckles, to be precise). In aikido practice, though, it is not to hit but to create a reaction.

Your other hand takes contact with the attacker’s striking arm and extends it. It’s not a block of the strike, but a way of leading it on – forward instead of to the side. So, your arm should be relaxed and the movement soft. Your hand should be angled outward, to increase the contact and control.

Your arms should move simultaneously in this entry, extending equally from your center. Otherwise you become unbalanced, and your arm movements become less effective. Next, in omote, you move out and swing the attacker’s arm around and grabbing the wrist with both hands on the way. After that, it’s the same as previous versions of shihonage.

In ura, after the entry step, you bring the attacker’s arm down to step around it to the other side with a tenkan move. Just as with shomen uchi, the ura version is rather awkward.