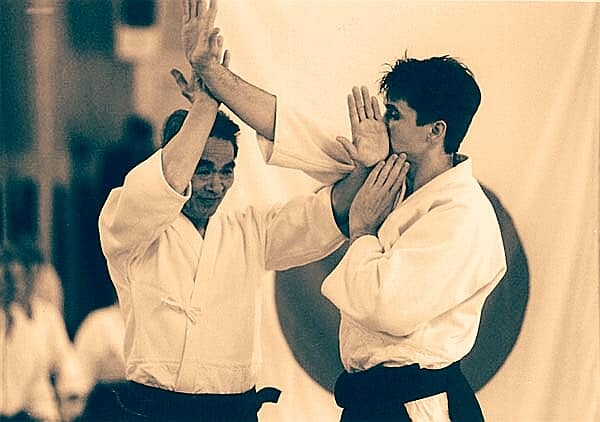 Iriminage is a very popular throwing technique among aikido practitioners.
There’s a delightful flow in it, as well as a charming simplicity – which doesn’t mean it’s that easy to do skillfully. But when you get accustomed to it, iriminage is definitely great fun to do. All aikido techniques are made with spiral movements, rarely straight lines. In iriminage, this is particularly evident.

Irimi means ‘entering body’, referring to the initial forward step towards the attacker’s side. It’s quite possible to do the iriminage throw directly, with one additional step behind the attacker. That can be done very quickly, indeed. Just take care, so you don’t hurt your partner in the practice.
But the technique is often done in a roundabout way, involving a tenkan (turning) step. It goes around, something like 180°, towards the attacker’s back. You bring the attacker with you, spinning around, at the same time as you bring him or her closer to you. At the end of this turn, you throw with an additional step behind the attacker.

The name iriminage can be seen as describing the final step, at the very throw, which brings you towards the attacker’s body, almost like a smooth kind of tackle.