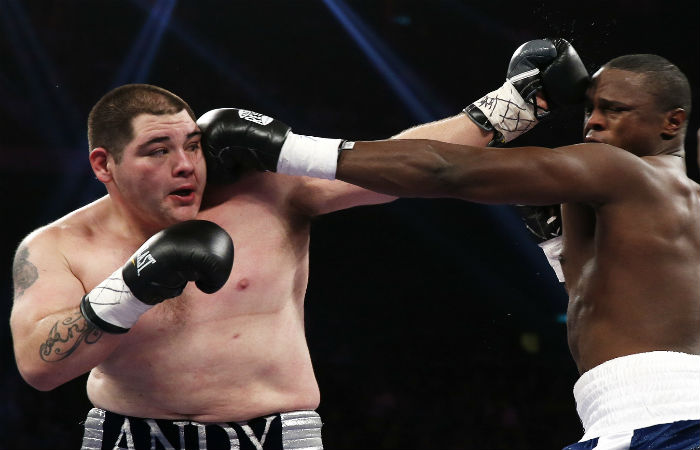 Andy Ruiz Jr believes that he has identified Anthony Joshua’s weaknesses. The challenger plans to “take advantage” of his opportunity to cause an upset.

Ruiz (32-1) will show him “no respect” in their world heavyweight title fight.

“There are weaknesses”, Ruiz Jr told Sky Sports. “He is the best right now because he has the belts. But the guys he has fought? I’ve sparred with them and they wouldn’t want to fight with me.”

“AJ has a style which will make me look impressive. Yes, he’s strong and big. But my style will take away his advantages.”

“This is business. I have nothing bad to say about AJ. I am the challenger and he is the champion.”

“There is respect between me and him – but inside the ring there will be no respect and I will try to win and knock him out.”

Joshua defends the IBF, WBA and WBO belts in his US debut on June 1.

“Carlos Takam, Dillian Whyte? I thought: ‘I can do a lot better than those guys.”

“I’m an exciting fighter. People look at me and say: “he’s slow, he will get tired”. But I’m a combination fighter.”

“I move, I throw punches, I go in to knock out my opponents.”

“Everybody that fights Joshua has fought scared – they move around and try not to get hit. But I’m not scared of getting hit. I’m here to get hit, and hit back.”

“People like watching me fight because I’m not scared and I bring a fight.”

Ruiz Jr has lost just once in 33 fights – he was beaten on points by Parker in 2016 with the WBO title at stake.

“I shocked Joseph Parker. I’m pretty sure he didn’t think it would that hard. He thought it would be easy,” Ruiz Jr said.

Anthony Joshua says he can't wait to make is American debut as he prepares to 'demolish' Andy Ruiz Jr. 💥

“This chubby kid? He thought he would box me around. But when he moved, I moved. When he punched, I punched. I really thought I won that fight.”

“I believe in my heart that we can win, and we are going to win. It will be one of the biggest upsets in the world. I can be the first one to stop him.”

“In America, you have to have a dream, and have the heart to pursue it. I am a family man and a nice guy but, inside the ring, I am an animal.”