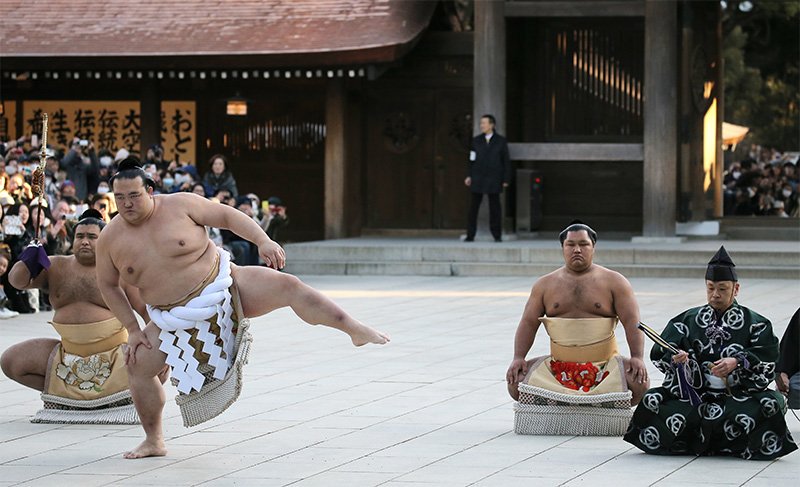 Ozeki Takayasu (6-1) kept a first makuuchi title in his sights with a gritty win against bogeyman opponent Aoiyama (3-4).

Joint leaders Hakuho and Kakuryu both won again on Saturday to wrap up the first week of the Tournament with unbeaten records.

Hakuho comfortably accounted for “No. 3 maegashira” Daieisho, while fellow Mongolian Kakuryu improved to 12-0 in his career against No. 3 Shodai.

In the final bout on Day 7 at Dolphins Arena, Shodai (4-3) gifted Kakuryu a belt grip after trying to battle him head on from the jump. The yokozuna drove him straight back over the straw for an easy force-out.

Asia Pacific conference starts in Nagoya tomorrow! Tag us if you are here for the last of the 2016 Grand Slam conferences! #PGAP16 pic.twitter.com/BQmt9BLdHI

Daieisho (3-4) opened with a hard charge against Hakuho, but the all-time championship record-holder used his superior speed and strength to keep the maegashira at arm’s length before slamming him to the clay.

The ozeki stayed composed as he resisted a force-out before pushing out the Bulgarian No. 2, who has won 11 of their 19 meetings.

Ozeki Goeido dropped to 3-4 with a disappointing loss to No. 2 Endo (3-4). The maegashira came in low and hard from the jump, giving Goeido little chance to avoid behing shoved out.

Sekiwake Mitakeumi improved to 5-2 by pushing out No. 1 Asanoyama (2-5). After a heavy collision, the two exchanged blows in the middle, but it was the sekiwake who fought with greater ferocity for a solid victory over the Summer Basho winner.

Alright sumo fans, today's the first day of the Summer Grand Sumo Tournament in Nagoya. Guess who got promoted to Maegashira #1 for this tournament?

Mongolian sekiwake Tamawashi saw his hopes of a winning record at the 15-day meet slip further away following a loss to komusubi Ryuden.

Tamawashi (1-6) started strongly, slamming Ryuden (3-4) toward the outside, but the komusubi slipped behind him with a well-timed sidestep before winning by pushout.