Ben Askren yearns for a rematch with Masvidal, Jorge responds 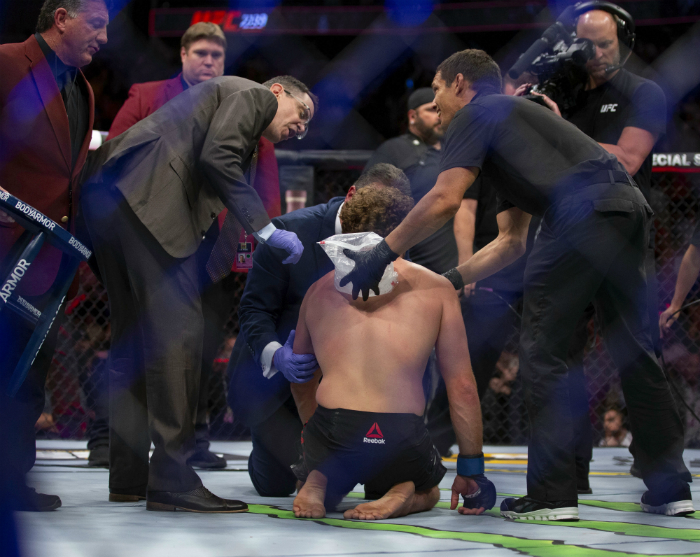 Former ONE and Bellator welterweight champion Ben Askren (19-1) recorded his first pro loss in MMA this year in his first UFC bout.

It was a historic night for mixed martial arts fans who witnessed the fastest ever KO in UFC history when Jorge Masvidal (34-13) landed a flying knee just three seconds after the fight had started. There was a lot of bad blood between the pair prior to the clash and it seems it will always be like that.

If “Funky” had won that fight at UFC 239 he would probably get a title shot at the end of the year or maybe early 2020, but since his first pro loss he’s been mocked from MMA fans all over the world. The American kept it quiet for the most part, but now he’s pretty sure he wants only one thing after his Demian Maia fight next Saturday – Jorge Masvidal rematch.

Pick yourself up and keep moving forward…

Ben Askren makes his return to the UFC in Singapore 💪

The 35-year-old admitted he likes the marketing behind the “BMF” belt that will be put on the line on November 2 when Nate Diaz squares off with “Gamebred”.

“What I said explicitly was I wanted to come back to see if I was the best in the world,” Askren said. “In that five seconds, we didn’t find that out. We found out Jorge has a fantastic knee and that I’m not invincible, but we didn’t find much else out.

“I think I can bounce back from that pretty quickly and hope that it happens.”

Ultimately, Askren’s long term goal is to fight for the UFC title, but avenging his loss to Masvidal would be a sweet reward as well.

“That would be really nice,” Askren said about a rematch. “Again, we’ll see where the division goes and where I’ll be, but I hope so.”

Masvidal was quick with the response and stated the following:

Get some wins and we can do it #supernecessary https://t.co/cUDt5hiVYQ