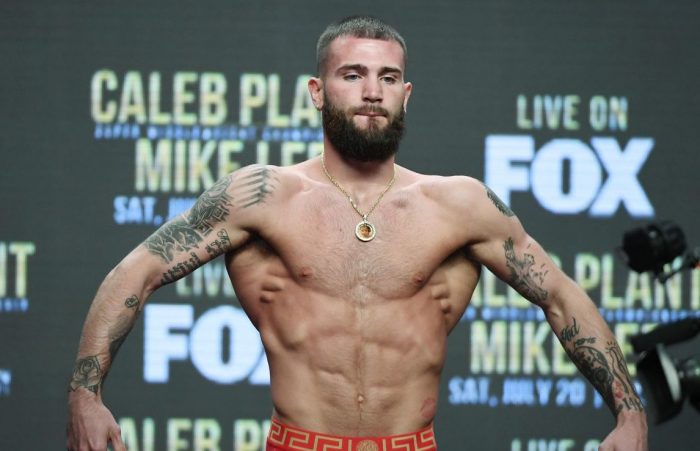 During this video interview with Marcos Villegas of Fight Hub TV, IBF super middleweight champion Caleb Plant shares his thoughts on Canelo’s recent fight against Billy Joe Saunders and explains that things will be different when it’s his turn to face the Mexican star. Check out some excerpts of what Plant had to say below.

“I mean, I never had my orbital bone broke so me personally, I’m not gonna speak on that too much because I haven’t had it broke, I don’t know what it’s like to be in that position.

“As far as him catching flack for being called a quitter from other people who don’t know what its like to feed their family with their hands, that’s too much, they can’t say that because you don’t know what it’s like to step between those ropes. Now if he’s catching flack because Daniel (Dubois) shit, then it turned around and happened to him, that makes a little more sense.

“If people want to give him shit because he gave Daniel a hard time then he deserves that, or that’s at least a reasonable response to what happened to him but as far as people calling him a quitter when you could never do what he did, much less what I can do, that would be too much.”

“Just ignorance, you know what I’m saying. In the famous words of the Black Mamba, ‘most people don’t know shit about boxing.’ From the outside, you know, a lot people these days are casual fans and causal fans tune into boxing or show up to boxing for two things, and that’s the event and the knockout. Anything deeper than that they’re probably not gonna be able to grasp — at least not too much.

“As far as comparing me to Billy Joe Saunders, in a list of ways, is just disrespectful… Anybody who knows me knows I stay in shape, they know that I keep my weight in check, they know I live a disciplined life. Billy Joe Saunders, he’s quick, but he’s not explosive. I punch harder than him, I’m bigger than him, I’m taller than him, my reach is longer than his, my footwork is better than his, and there’s a whole list of reasons. And I can go on and on and reasons why we’re not the same fighter.”

On a potential fall unification fight with Canelo

“This has been a long time coming where I just feel like there’s things that I hold over him that he can’t — when it comes down to it — he just can’t fuck with me.”

On if the Canelo fight is actually going to happen

“That’s what we want. That’s what he wants, that’s what I want. And so I got a great team behind me, they’ve done a perfect job with me thus far. I became a world champion in 17 fights, I feel like I’m one of the biggest stars in boxing. I mean my last fight got 2 million views, that’s more than any other fighter since 2019 I think they said. So I’m in a great spot and this is a fight that I want and it’s a fight that he wants. He wants to become undisputed, I want to become undisputed. There’s only one way to make it happen.”