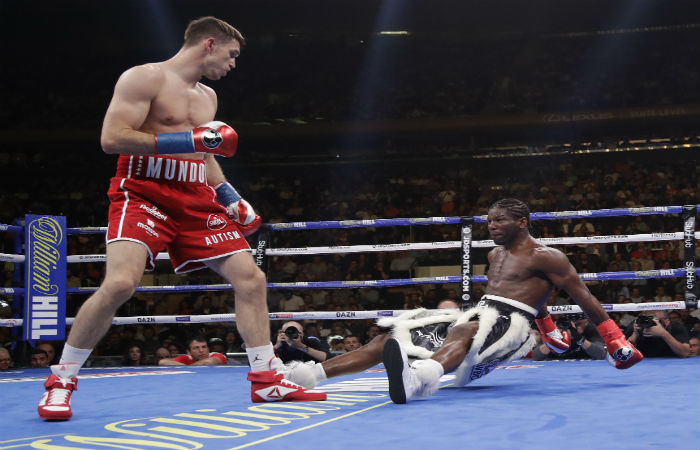 With it now expected that Canelo Alvarez will face Billy Joe Saunders on May 2, with an official announcement expected any day (or hour) now, Canelo is making what appears to be an official full-time move to 168 pounds, challenging for Saunders’ WBO title.

Alvarez (53-1-2, 36 KO) does already hold the WBA’s secondary “world” title at 168, which he won in Dec. 2018 from Rocky Fielding, and there was a lot of talk about him possibly facing WBA “super world” champion Callum Smith in May, particularly after Smith (27-0, 19 KO) struggled in his last outing, a disputed decision win over John Ryder on Nov. 23.

Smith was offered the fight and turned it down. The fact that he turned down the offer he got is not disputed, but the 29-year-old Liverpudlian doesn’t feel it was an honest offer for a fight, and still doesn’t think Canelo actually wants to face him.

“He made me an original offer, which I believe was too low,” Smith said. “I said no. I believe Billy Joe said no to the same offer, and then I kinda thought we’d start negotiating, have a back and forth, but that was it. They made one offer and then went to social media saying I didn’t want the fight. But they went back and forth with Billy Joe and he got the fight and good luck to him, I hope he goes over there and does it.

“I don’t think they ever really wanted me in the first place. They just covered their own back by saying they’d offered me the fight and I turned it down, which wasn’t the case. Obviously I’m disappointed. I’ve said in the past it’s a fight I never believed I’d ever get. I still don’t, but to then get an official offer, you do start thinking, ‘Will I get the fight?’ and start thinking of ways to beat him.

“But it is what it is. I’m in a good position. I’m world champion, I’m undefeated, and I’m sure there’s big fights out there for me without Canelo Alvarez. It is a fight I wanted, but good luck to Billy Joe.”

Smith: Canelo never wanted to fight me! ❌⁣ ⁣ @callumsmith23 says that team @canelo only made 1 offer to him, but failed to start negotiations when his team turned it down. ⁣ ⁣ He will now look elsewhere for his next opponent.

What Smith will do next remains to be seen, but there’s every chance that if Canelo beats Saunders and Smith doesn’t lose a fight, we will see Canelo-Smith later this year. Alvarez beat Callum’s older brother Liam back in 2016, and Callum is still seen as a top fighter in a division that doesn’t have a sincere ruler at the moment; realistically, Canelo beating Saunders convincingly on May 2 would probably make most people see Canelo as the top fighter in the division, and he’d be by far the biggest star.

Of course it’s also possible Canelo will have a third fight with Gennadiy Golovkin in September, as DAZN are again pushing hard for that fight to happen. Time will tell, but Smith may well have a grudge. If Saunders got a negotiation that Smith did not, it might say plenty about the style matchups Golden Boy and/or Canelo preferred.