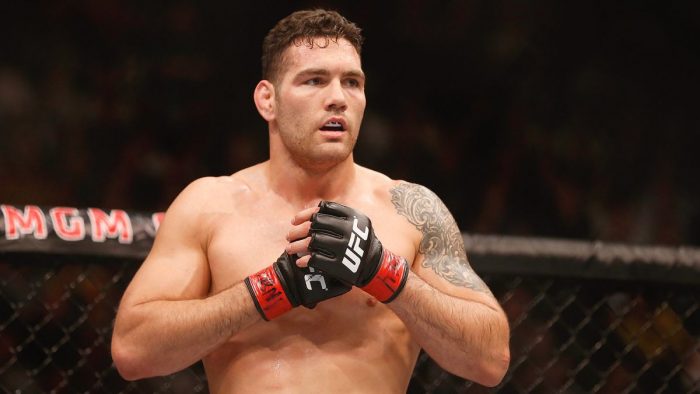 A scramble for willing opponents almost rebooted a conclusive middleweight fight – in a heavier division.

Yoel Romero may have shrugged off a move up to light heavyweight prior to a second failed bid for a middleweight belt. But his longtime manager, Malki Kawa, tried at one point to secure a rematch against Chris Weidman in the bigger division.

Were it not for an injury to Romero and the postponement of all upcoming UFC events, the fight might have taken place at UFC 250 on May 9.

”They actually offered us Weidman for this next fight, but Yoel has an orbital eye injury, and I was waiting to see if I could get him cleared to fight May 9, and they canceled the event,” Kawa said on an Instagram live video chat.

Romero knocked out Weidman with a vicious flying knee when they met nearly four years ago at UFC 205. The ex-middleweight champion suffered a nasty gash on his head and was suspended for 60 days; it was his second consecutive loss after ceding the belt to Luke Rockhold.

Weidman later moved to the light heavyweight division, seeking greener pastures after a 1-4 run at middleweight. But he decided to return to 185 pounds after a fight against future 205-pound contender Dominick Reyes ended in a first-round knockout, and he was booked against Jack Hermansson.

That plan was scuttled when the UFC was forced to indefinitely postpone a May 2 event in Oklahoma City, and the matchup was scratched because Hermansson was subject to a travel ban in Norway.

Weidman confirmed that Romero and Edmen Shahbazyan, who’d been displaced by the postponement of UFC Portland, were two options presented by the promotion. Now, the ex-champ awaits his next matchup.

According to a report on Friday from ESPN, he might not have to wait long. The UFC hopes to promote as scheduled the May 9 fight card, originally scheduled to take place in Sao Paulo, despite a recent shutdown triggered by the promotion’s broadcast partner.

Romero previously has written off a move up in weight, saying he’d be at a disadvantage against heavier opponents. But Kawa said that might not be etched in stone.