Cyborg: I think every belt is something special for me 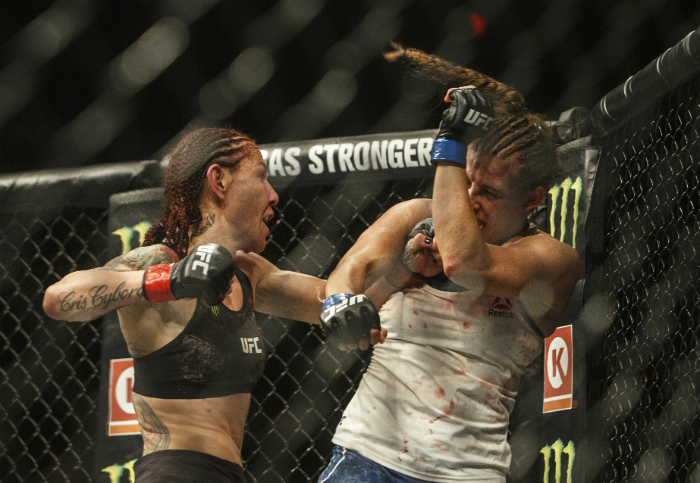 In her Bellator debut Cris Cyborg claimed the company’s women’s featherweight crown to a career list of accomplishments that includes Strikeforce, Invicta FC, and the UFC.

“I was never thinking this is going to happen,” Cyborg told reporters at the Bellator 238 post-fight news conference. “When I start, I have a dream. I have a dream I want to do my best. One thing I have in my heart, I want to prove that girls can fight like the guys. We can be violent, we can be technical, you can make the people like you and watch your fights. … I’m thankful. I feel blessed I have the opportunity to hold four titles.”

Cyborg, who said she broke her nose two weeks before the fight, went through why each championship had meaning.

“I think every belt is something special for me,” Cyborg said. “First one, Strikeforce, is the first featherweight division, (Bellator president) Scott Coker makes 145 pounds. Invicta, I came from a hard time in my career and everyone saying, ‘She needs to prove (herself), she needs to prove,’ and they come, and I fight for the Invicta belt.

“And UFC, we make the difference. We make history. I have my division there; they never wanted to have me there. My fans put me there. I cut weight two times for 140. I almost killed myself, but we make the history. Now they have that. And now Bellator.”

Cyborg wasn’t ready to call her next shot after her victory, saying she was content to let Coker handle things from there.

“Sometimes you do something nice for the people, and I’m going to change them forever,” Cyborg said. “That means the most to me. To hold the belt as a symbol is nice. People love it, and I love it a lot different, but for me is just a symbol.”