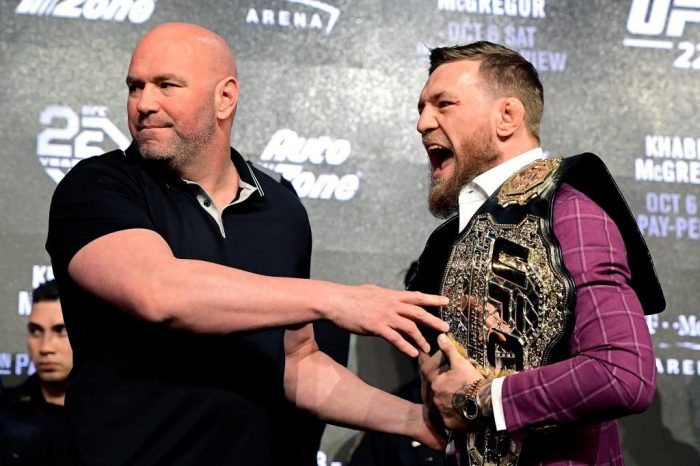 Dana White expects the Conor McGregor-Dustin Poirier rematch to be made official, but it won’t happen in a partially-filled stadium.

The UFC President spoke to the media Thursday in Abu Dhabi and provided an update on how negotiations are coming along for a second meeting between McGregor and Poirier. First proposed as an exhibition charity bout by the two fighters over social media, all the parties involved appear to be in agreement that the rematch will now be a UFC-sanctioned fight that is to take place on Jan. 23.
McGregor would like the fight to happen at AT&T Stadium in Arlington, Texas, but White doubts that it will take place there or at any stadium in the foreseeable future due to coronavirus pandemic precautions. In the past few months, the UFC has strictly held events in two controlled locations, Yas Island in Abu Dhabi and UFC APEX in Las Vegas.

Until venues can be packed to capacity again, White is sticking with the current plan.
“He said, ‘yes’ and Dustin said, ‘yes,’ so now it’s a matter of getting contracts signed,” White said. “Listen, we’ve had a very good relationship with Jerry Jones for a long time and talked about Dallas, Texas, stadium forever.

“I’m not going into any arena where we’re going to fill a quarter of the arena or half of the arena or any of that stuff, so when crowds are ready to come back we’ll do crowds again.”

With much uncertainty surrounding the pandemic, the UFC has had to adapt on the fly and also deal with limitations regarding titleholders and stars who live and train outside of the United States. That includes featherweight champion Alexander Volkanovski, who is expected to fight the winner of this Saturday’s main event bout between Brian Ortega and “The Korean Zombie” Chan Sung Jung.

White was asked if fans will have to wait for the UFC’s next trip to Fight Island to see Volkanovski fight again and he took the opportunity to express his hope that everything will be clearer for his organization and the rest of the U.S. following the presidential election on Nov. 3.

“Obviously, when we all leave Fight Island and go home we’re literally days away from the election and I truly believe that the election’s gonna have a huge impact on all the bullsh*t that we’ve been dealing with for the last however many months. I’m hoping a lot of this is gonna go away after the election.”