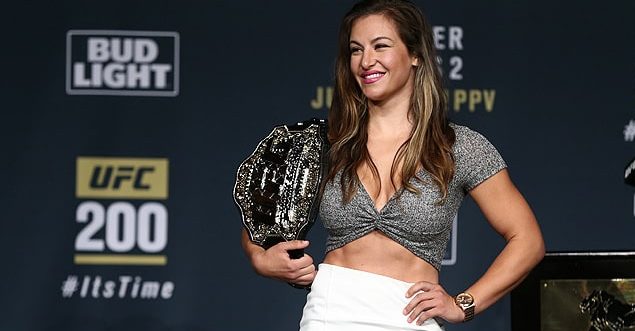 Former UFC bantamweight champion Miesha Tate is returning to the octagon. But according to UFC President Dana White, her situation is a lot different from two other stars who retired when they were stars: Tate’s longtime foil and ex-champ Ronda Rousey and Khabib Nurmagomedov.

The topic of retirement was broached several times at the press conference for UFC 260 – White hadn’t publicly weighed in on the confirmation of Nurmagomedov’s retirement or Tate’s recent comeback announcement.

The UFC exec’s default position – one that’s backed up by decades of evidence in a business where fortunes quickly rise and fall – is that fighters come out of retirement when they need money. That put him in a disadvantageous position when it came to Nuramgomedov, who laid out the reasons for hanging up his gloves after defending his title this past winter at UFC 254.

“I think it’s for money, and Khabib isn’t going to need any money any time soon,” White told reporters. “So, in the last dinner that we just had, I feel like he’s done. He feels like his fighting was a lot of pressure on his parents, and then what just went down with his dad, and now he’s looking at his mom saying, ‘I just can’t do this to my mother.’”

White wasn’t sure what motivated Tate to return to the cage after five years of retirement. He indicated the ex-champ did things out of order when she walked away from the sport, but he added that didn’t necessarily play into her current prospects.

“I honestly don’t know what her reason is, but when she left, women are kind of different when they retire,” he said. “She went out and started a family, and I told her … and I haven’t talked to her face-to-face about this, but I told her after the last fight, she got her nose fixed, and I told her not to fix her nose. When you’re done fighting, I’ll fix your nose. We’ll get your nose taken care of, you go to the best guy in LA and get your nose done.

“She did it, and then she fought Amanda Nunes. And you’ll see in that fight, Amanda punches her right in the nose, and you saw her fold. I saw it happen right there, the night of the fight. So she went and had a family. She’s had five years now. I guarantee her nose is a lot better. It will be interesting to see how she does. I think she’s going to do well.”

Unlike Nurmagomedov, who retired with a spotless 29-0 record, Tate’s career was filled with ups and downs as she blazed a trail in women’s MMA. On two separate occasions, she lost in title fights to Rousey, who submitted her with a signature armbar. But when Rousey was knocked out in a shocking upset to Holly Holm, Tate was first to capitalize with a come-from-behind win that brought her the UFC belt.

A subsequent knockout loss to Nunes and a listless decision setback against Raquel Pennington spelled the end for Tate, but she said she was willing to try again with the two-division champ after facing the retiring Marion Reneau in her return.

Not at all willing to give it another go is Tate’s rival, Rousey. Although White said he spoke with the once-dominant champ on Wednesday, he said fighting couldn’t be further from her mind.

“Don’t even f*cking start, you guys,” White said. “Yesterday about lots of different things, not this. Absolutely, positively not coming back, ever.”