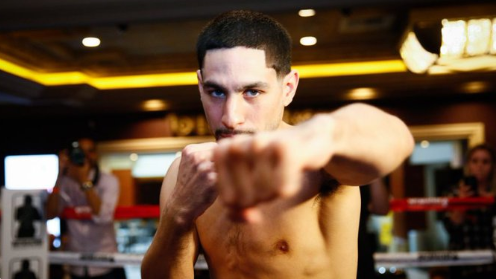 Danny Garcia seemed to deserve a very clear decision victory over Jose Benavidez Jr tonight, and did rightfully get his hand raised, but had to settle for a majority decision thanks to some classic Waleska Roldan scoring.

Garcia (37-3, 21 KO) was making his 154 lb debut with this fight, and while he definitely is small at the weight, he boxed smart, looked fresh, looked like the break from boxing since the end of 2020 really did do him some good, and just outclassed Benavidez (27-2-1, 18 KO) for the most part.

Benavidez just wasn’t able to connect with much of note, though he did stick his tongue out plenty and make a lot of faces, repeating that Garcia wasn’t hurting him, though Garcia kept doing more and winning rounds.

In his post-fight interview, an honest and emotional Garcia talked about some of his battles with mental health in recent times, specifically dealing with anxiety and depression.

“I still battle some days. I still have some dark days, but I try to stay positive. I feel good now,” Garcia said. “My dad was there with me the whole way. I’m nothing without this man. Because of him I’m here.”

His father, Angel, was right at his side, showing support and encouragement for his son. Danny also said that he’s been asked why he went back to boxing, since he’s made good money, and he said, “In order for me to be Danny Garcia again, I had to be back in the ring, do what I love and be a fighter. People ask me, ‘Why do you still fight?’ I love to fight. This is what I love to do.”

“I’m happy with my performance. I think I did a good job,” Benavidez said for his side. “I fought one of the best of the best in his backyard. I honestly felt like I won, but it is what it is. I’m not gonna let this bring me down.”

Despite the trash-talking in the ring and before the fight, Benavidez did show Garcia respect after, and said, “He’s a great person. We had a hell of a fight tonight.” He also said he’d like a rematch.