David Haye: Derek Chisora is more disciplined than before 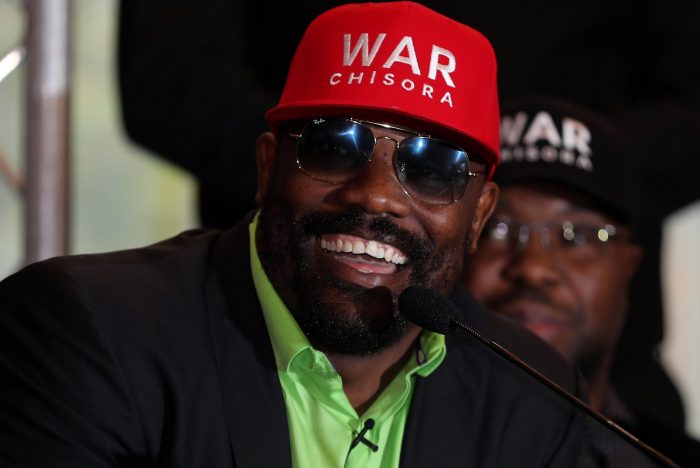 David Haye, a former rival of Derek Chisora’s and now the heavyweight veteran’s manager, says that compared to his wilder, younger days, Chisora is now a more disciplined fighter heading into his tentative May 23 showdown with former cruiserweight champion Oleksandr Usyk.

Speaking with Sky Sports, Haye remembered Chisora’s 2012 challenge against Vitali Klitschko for the WBC title in Germany. Chisora lost, but did perform a bit better than many expected. He gained headlines before the fight for trash-talking Vitali and spitting water in his brother Wladimir’s face, and then after for a press conference brawl with Haye, which led to their fight five months later.

“Derek forced the fight and did well. He lost, but it was a spirited effort that he got a lot of credit for. The Derek of today is fitter and more disciplined. At the time he was unruly, did whatever he wanted, but didn’t live the life of a consummate professional. He was just tough enough, slapping and spitting.”

Now 36, Chisora (32-9, 23 KO) is a battle-tested and tough elder statesman in the division, and given the fact he’s a thick, strong, and sturdy true heavyweight, there are many wondering if the naturally leaner Usyk (17-0, 13 KO) will be able to handle him. It’s just Usyk’s second fight at heavyweight and his first against a credible opponent, and Haye has said before he doesn’t feel Usyk has the firepower to stop Chisora from coming forward all night.

Chisora, for what it’s worth, has said he expects Usyk to be his toughest challenge to date just because he’s such a master boxer. Chisora has faced some damn good fighters — Vitali, Tyson Fury twice, Dillian Whyte twice, and Haye among them — but he clearly has a great respect for Usyk’s particular abilities.

At this point, it seems extremely questionable, even leaning more toward unlikely, that we’ll see this fight on May 23, but if it’s postponed, we’ll see it at some point, I’m sure. And that’s good, because it’s an intriguing matchup and a legit test to see what Usyk has in the tank as a heavyweight.