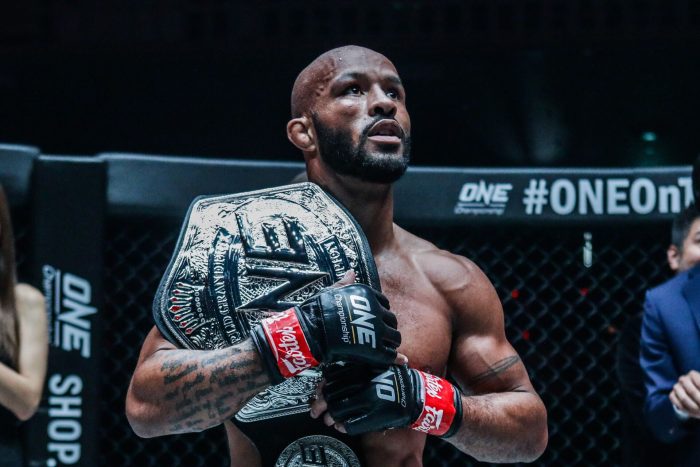 When it’s all said and done, Demetrious Johnson will retire from mixed martial arts as one of the most accomplished fighters in the history of the sport but he’s not exactly sitting around touting his accolades.

There was a time when the 34-year-old veteran was battling for respect as the top pound-for-pound fighter in combat sports while also seeking to break records as he tore through every challenger attempting to wrestle his title away from him.

While Johnson still loves competing, and he has no plans to walk away from fighting any time soon necessarily, his priorities have admittedly changed as he reaches the final stages of his career.

“From 2012 all the way to 2018, it was me as the champion [in the UFC],” Johnson told MMA Fighting. “I’ve been in the game a long time. I feel me spending time with my children outweighs anything I can achieve in mixed martial arts. I just love being a father, love being home with the kids. I still love competing but I know that window, my transition from being a competitor, the reality is it’s going to be coming to an end within the next couple of years.

“I think a lot of athletes have a hard time realizing that, and for me, I’ve always been a person that takes my hat off. I have no fights scheduled so I’m not even thinking about fighting. I’m in the gym working out to stay healthy and stay fresh because it’s my lifestyle, but I’m not in the gym like ‘I can’t wait to fight again, I can’t wait to get a title shot.’ That’s not the type of person I am. I’m more focused on my children and what I’m going to do, plan their birthday parties, etc. To say that a couple more years [left] is pretty much spot on for me. Things could change.”

Part of the reason Johnson is addressing the remainder of his career is due to the outcome in his last fight where he suffered a knockout loss to Adriano Moraes with the ONE flyweight title going up for grabs.

Now the defeat itself isn’t the reason Johnson is starting to think about his eventual retirement but instead it’s Moraes saying repeatedly that he would gladly offer the former UFC champion an immediate rematch to challenge for the title again.

While he appreciates the acknowledgment from Moraes when it comes to his standing in the sport, Johnson has no problem stepping aside and allowing other competitors the chance to fight for the title.

“At the end of the day, I feel there are other people who are more deserving,” Johnson said. “Just because I have a name, it doesn’t warrant me a title shot. I’ve always been that way even when I was a champion. There’s guys like Yuya Wakamatsu, who’s put together a three-fight win streak. So for me, I’m not even focused on who my next fight is [against]. I know it’s going to be in the fall or winter time. So for me, I’ll see what ONE Championship offers me and we’ll go from there. I mean I just got finished and I have no problem working my way back up.

“I’m not in a rush to become a world champion again. I’m just enjoying my time in mixed martial arts with the time I have left. We’ll see what happens. I’m not sitting here hoping or betting for one. I’m just chilling and seeing what comes my way.”

As much as winning a world title means to some fighters, Johnson has already climbed to the top of that mountain and sat there as a reigning and defending champion for several years.

It’s not to say he wouldn’t appreciate the opportunity add another championship to his collection but Johnson admits that’s not the driving force behind his career in MMA.

“It does not consume me,” Johnson said about fighting for the title again. “I’ll never let something consume me and drive me insane. Because I feel like when people set goals — when I first jumped into mixed martial arts, my goal was never to be a world champion. It never was. Because when I jumped into mixed martial arts, there was no 125 [pound division]. There was no 135 [pound division]. The smallest weight class was 155 [pounds] and that got cut and then it went to 170 and then 155 came back.

“For me, my goal wasn’t to be a champion. I was just so smart and so damn good that I got better than everybody and became a world champion and defended it 12 times. For me, I’m here to have a good time and relax. I’m sure there’s other guys out there who are striving and consumed about trying to become the best in the world and become a world champion. I’ve been there, I’ve done that. Now I’m just enjoying my life and taking it fight by fight.”

In many ways, Johnson could never fight again and his legacy in the sport would already be secured, but he absolutely plans to continue competing until the day comes when he wants to call it a career.

Even when he finally hangs up the gloves for the final time, Johnson won’t be the one banging the drum to call him the greatest of all time or anything else for that matter.

He’ll just be the person striving to raise his kids the right way because that means far more to him than anything that has ever happened inside the cage.

“Here’s the thing, I’m not sitting around a campfire with my friends and family reminiscing about my career,” Johnson said. “I’m just not that type of person. What I’ve accomplished in the sport of mixed martial arts, that’s always going to be there. It was a great time what I did. I don’t want people to take this the wrong way but when you’ve done something since you’re 18 years old — I’m f*cking 34 now and I don’t want something to consume my life. I want to be the best version of myself. Whether that’s the pound-for-pound best in the world or being a world champion or that’s just being a great athlete and a great ambassador for the sport of mixed martial arts. I feel like some people put so much stress on themselves to be a world champion and guess what? It may never happen. For me, I’ve taken that mindset out of my mind.

“When I’m in the gym, I still train my ass off. I still learn new techniques and do everything but I’m not going to let it consume my life. Do you think my kids care if I’m the world champion? They don’t give a sh*t. There’s more important things going on in my life than fighting and that’s my family. I want to be with my family and let that consume my life.”