Derek Brunson on Kevin Holland: ‘I don’t really see any one place that he is better than me’ 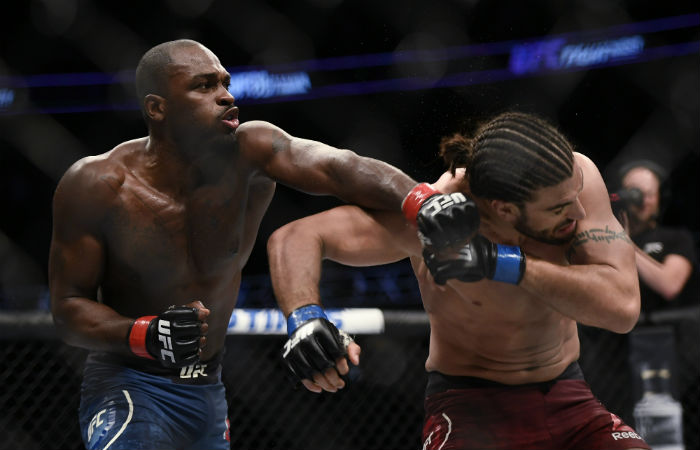 Derek Brunson wanted his next opponent to have a lot of hype behind them much like his most recent one in Edmen Shahbazyan. The young Shahbazyan was thrust into stardom and poised to be the next big thing in the middleweight division, so he was given a chance to prove himself against a staple like Brunson in his first main event outing at UFC Vegas 5.

Brunson was able to temporarily halt the momentum of Shahbazyan, who he ended up finishing in the third round of their fight with strikes. Now, Brunson looks to do the same thing again against yet another rising young star in Kevin Holland.

Holland went on a five-fight win streak in 2020, with four of those coming by way of knockout. He found himself being the talk of the town after those performances, and was recently revealed to be one of UFC President Dana White’s fighters to watch in 2021. This was good for Brunson, who wanted exactly this type of opponent for his next fight — and he got it.

It was reported last week that Brunson and Holland would be headlining a Fight Night card scheduled for some time in March. Brunson spoke about why he accepted the fight with Holland, and how he sees it going, on a recent appearance on the Real Quick with Mike Swick Podcast.

“I tried a lot of options and it seems like Kevin Holland is the only guy that I’m getting traction on right now,” said Brunson. “I don’t want to fight everybody’s path or their ideal toughest fights. I want to fight people who are on winning streaks, people who have a lot of hype. I want somebody with some buzz who the UFC cares about.”

Brunson did previously call out a number of top names in the division such as Robert Whittaker, Darren Till and Paulo Costa, but none of those fights materialized. So, Brunson moved on to the next option in Holland, who he has gone back-and-forth with on social media over a potential fight.

With the fight being made official, Brunson started his preparation by watching several of Holland’s fights. He admits he gives credit where it is due, but there was something about his last fight against Ronaldo ‘Jacare’ Souza — which resulted in a first-round knockout — that seemed off.

“Right now, I feel like I’m really coming into my prime, so I’ve watched a couple of his fights and I take in the good and bad,” said Brunson. “I was like, ‘He’s really good here. He’s not so good here. He’s average here.’ I look at everything and the last fight, I had to throw that out. That’s a fight to throw out with Jacare. Nobody gets knocked out from their back. Jacare fell asleep. He took him down and relaxed, especially a guy like that. Imagine a guy with BJJ as good as his and to sag back like that instead of like — BJJ is about putting pressure on guys. That was just super weird. I threw that out. That don’t even count to me.”

After doing tape study on Holland, Brunson is confident that he can be the one to put a stop to this breakout fighter. No matter where the fight goes, Brunson believes he has the advantage, which is why he sees himself walking away with a victory on that night.