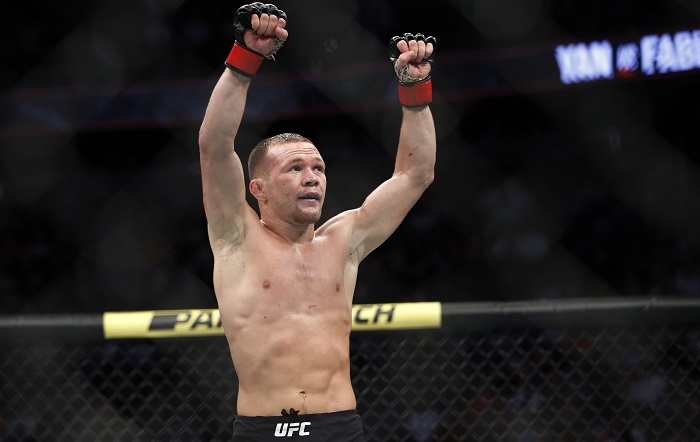 Dominic Cruz seems to be getting closer to an Octagon return. In the meantime, he wants to clear up a few things.

The former UFC bantamweight champion hasn’t competed since December 2016 when he lost that title to Cody Garbrandt at UFC 207. After a three-plus-year road of injuries and recoveries, Cruz is feeling stronger and healthier with each day that passes.

Earlier this month, surging bantamweight contender Cory Sandhagen took to Instagram, revealing he agreed to fight “The Dominator” for the UFC’s scheduled return to San Diego on May 16 and was waiting on Cruz’s response.

In a recent interview with MMA Fighting, Sandhagen said he thinks Cruz “told the UFC he wasn’t going to be ready by then” before agreeing to fight Aljamain Sterling.

Cruz sees the situation from a much different perspective.

“That’s what I want to clear up because I keep getting people asking me about Cory Sandhagen and that he took the fight, and then he asked me or something,” Cruz told MMA Fighting. “I’m like, ‘well, is that a fact, or is that your experience?’ because I didn’t talk to Cory Sandhagen.

“Who said that I took it? What I’ve heard is that he’s saying that he took the fight and I didn’t. My question is, who did he talk to that said that I got offered the fight and I said no? What I know is, there’s only one common denominator between myself and any of the other fighters that might get matched up, Sean Shelby. He’s the matchmaker. Don’t we all know that in the whole world?

“What Shelby does is he creates fights between the fighters before the fight happens so that he can get himself out of the way,” Cruz continued. “That’s my experience. It’s not a fact. And what I’m getting from this is Shelby’s telling Sandhagen about me, then Cory Sandhagen puts it out there and then expects me to bite.”

According to Cruz, the conversation in regards to his return to the Octagon began with a question on what would be the fastest route to a 135-pound title shot.

When he was given Petr Yan’s name, Cruz says he didn’t hesitate to jump on that opportunity.

“I was thinking, I want a title shot. I don’t want to just fight somebody, I want to fight towards the title. So I would fight anybody, let me get the title shot after that fight.

“[Sean Shelby said] ‘Petr Yan’s the guy.’ I said yes, I’ll fight Petr Yan. He said I can’t fight Petr Yan because he’s fighting Marlon Moraes. Well then I’ll fight Moraes, or Petr Yan, because those are direct fights straight to the title. After I beat either of those guys, I get a title shot. That’s what I’m in this for, not to fight 13 times beforehand.

“Sean Shelby’s saying all of this stuff to different fighters and not telling me about it,” Cruz continued. “You offered me Petr Yan to get to the title, and then you switched it up. That’s the truth.

Cruz has been on a long layoff once before. After successfully defending his bantamweight title against Demetrious Johnson in October 2011, Cruz missed nearly three years of action after suffering a torn ACL in 2012, and a torn groin ahead of a scheduled fight with Renan Barao in 2014.

The Alliance MMA product returned in September 2014 and finished Takeya Mizugaki in just over a minute at UFC 169, before reclaiming the bantamweight title 16 months later in a split decision win over TJ Dillashaw at UFC Fight Night 81 in Boston.

Since dropping the title via unanimous decision to Garbrandt, Cruz was scheduled to face Jimmie Rivera at UFC 219 exactly one year later and was forced to withdraw from the bout after suffering a broken arm. His last scheduled fight was set for January 2019 against John Lineker before a shoulder injury lead to Cruz’s removal from that event.

Now that he is eyeing a return in 2020, Cruz has his sights set on capturing UFC gold for the third time. If the plan is to make him earn a title shot in more than one fight, Cruz is totally fine with that — although he will take extra time to get himself at peak physical health.

“I’m going to fight in 2020. The real question is, how do I get a title shot? I want to fight somebody and then after the fight, let me go fight the best guys.”

The next assignment for Cruz will be at the broadcast booth for the upcoming UFC 249 event. With the event currently needing a location and, as all signs are pointing to, a new main event due to the coronavirus pandemic keeping Khabib Nurmagomedov in Russia for his scheduled lightweight title fight with Tony Ferguson, nothing is for certain.

When asked about a more specific timetable for a return to the Octagon, Cruz believes that there are more important things to worry about in the world besides his comeback fight.

“Why are we talking about my future when, realistically, we need to come together to figure out how to keep the sport going? Not when Dominick Cruz fighting. How do we keep MMA moving is the question for me. That’s what matters to me. I’m a part of MMA and I can’t fight, nobody in the UFC can fight until we beat this virus situation.

“It’s shut down, we have one fight coming up and one of the half of the main event is already out. That fight was going to be the biggest fight ever, in my opinion. I was so looking forward to it.”