Everything you need to know about SENSHI 13 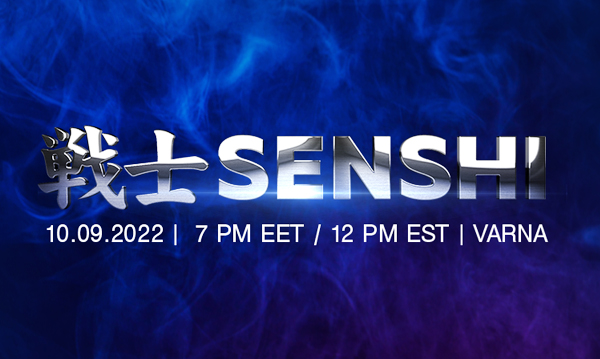 Titanic clashes, a lot of adrenaline and fighting spirit will delight fans of combat sports on September 10, when the new 13th edition of the SENSHI international professional fight nights will be held. The start time of the spectacular combat show will be given at 19:00. The resort complex St. St. Constantine and Elena in Bulgaria hosts this enormous event.

Tickets for SENSHI 13 are on sale and can be purchased on the Eventim.bg network .

In the main fight of the evening, the debutant from Germany Nenad Cosic and the Estonian Juku Jurjendal will compete in a fierce titanic battle in the +95kg category according to the KWU Full Contact rules.

Here are the titanic clashes that SENSHI 13 will present on September 10:

The opening match of SENSHI 13 will offer an intriguing and unpredictable clash. Renato Prenga from Italy will make his SENSHI debut. He is 18 years old and is the Italian Muay Thai champion.

Joe Miyahara is from Japan. He is 27 years old and will step into the SENSHI ring for the second time in search of his first victory. He is a 2019 KWU World Championship Silver Medalist, 2018 All Japan Kyokushin Champion and WFKO Champion The Yamburg Cup – Yamal 2016.

Aysam Chadid is 27 years old from Spain. He is the champion of his country and is the ISKA European Champion, and he also won the Glory of Hero tournament. This will be his SENSHI debut.

On September 10, Ivan Naccari will enter the SENSHI ring for the first time. He is 28 years old from Italy. Naccari is WPKF-PRO World and International Champion and WFMC Italy Champion.

Amza Ridene is 36 years old from France. On September 10, he will make his debut in SENSHI with a bout against one of the most titled Bulgarian fighters. He is the WFC Muay Thai World Champion, K-1 World Style Champion and three-time winner of the K-1 Japan shidokan tournament.

Atanas Bozhilov is one of the most respected and talented kickboxers in Bulgaria. He is 36 years old and a competitor of the Burgas club “Fight Factory”. Bozhilov has 28 wins and only 2 losses in his professional career. He is the KGP and WAKO PRO World Champion and has ten victories in the SENSHI ring.

Lisi Corneliu will make her debut in the SENSHI ring on September 10th. He is 25 years old from Moldova. Corneliou is the winner of the 2022 European Kickboxing Cup.

27-year-old Žiga Pecnik from Slovenia will be looking for a second success in the SENSHI arena. He is the WAKO PRO European Champion in 2018 and 2021. Pecnik is also a bronze medalist from the WAKO World Championship in 2021.

His opponent is 20-year-old Alessio Malatesta from Italy. He is the MAX Muay Thai Champion and the MTGP Intercontinental Champion, as well as the IMTKA World and European Champion.

Vladislav Tiurmenko is 23 years old from Ukraine. He is the winner of the WAKO Kickboxing World Cup and the Wizard Open Ring 2018/2019 international tournament. Tiurmenko is also the champion of Ukraine in kickboxing K1 WAKO.

His opponent is 24-year-old Nikola Todorovic , who is one of the most famous and quality Serbian fighters. On September 10, he will enter the SENSHI ring for the fifth time. Todorovic is the 2021 WAKO PRO world champion. in K-1 style, 2021 WAKO World Championship bronze medalist. and champion of professional Serbian fight nights “Megdan”.

Stefan Latescu is 21 years old from Romania. On September 10, he will enter the SENSHI ring for the second time. Latescu is among Romania’s most promising talents. He is the ISKA world champion, and behind him there are a number of meetings in the most elite Romanian and European circuits.

On September 10, Anthony Leroy will make his SENSHI debut. He is 34 years old from France and has a silver medal from the WKN European Championships, and is a two-time silver medalist at the K-1 National Championships.

Lucas Achterberg is 26 years old from Germany and will also step into the SENSHI ring for the first time. He is the champion of the Fair FC chains in 2020 and “Big Game” champion in 2018. Lucas won the Gladiators 8-Men tournament.

Abdoul Sy is 30 years old. On September 10, he will step into the SENSHI ring for the first time under the Senegalese flag. Sy has six wins in professional fights, five of them by knockout.

26-year-old Nikola Filipovic from Serbia will be looking for a second win in the SENSHI ring. The elite Serbian fighter is the 2018 WAKO European Champion. and is the winner of two WAKO world titles in 2019 and 2021.

Mahdi El Hadj from Morocco will make his SENSHI debut on September 10. He is 23 years old and ISKA European Champion in K-1 style.

Florin Lambagiu is 26 years old and known to combat sports fans as “Rambo“. He is one of the best boxers on the Romanian kickboxing scene. He is the winner of the Romanian National Sambo Championship in 2018. “Rambo” is known for his devastating left jab. On September 10th, he will be looking for his 4th win in the SENSHI arena.

Daniel Krost is 37 years old from France and has serious experience behind him. He is a multiple kickboxing champion of his country and has won the Emperor Chok Dee tournament in the K-1 style. On September 10, he will enter the SENSHI ring for the first time.

Eduard Aleksanyan is 26 years old from Bulgaria and will be looking for his seventh win in the SENSHI ring. His stage name is “Mr. Shaw”. Last year he achieved his most significant success, capturing  the WAKO PRO European K-1 Pro Belt  in Cat. up to 81.4 kg. Aleksanian is a two-time National Kickboxing Champion and Savages Tournament Kickboxing Champion.

In the final battle of SENSHI 13, Nenad Kosic will enter the ring of the international fighting gala for the first time . He is 29 years old from Germany. He is the Balkan Kickboxing Champion and a finalist in the FFC Futures tournament in Croatia.

His opponent is Juku Uriendal from Estonia. He is 33 years old and fans already know him from the SENSHI ring. On September 10, he will look for his second consecutive victory in the arena of the international fight gala night. He is the 2014 IFMA Muay Thai World champion. 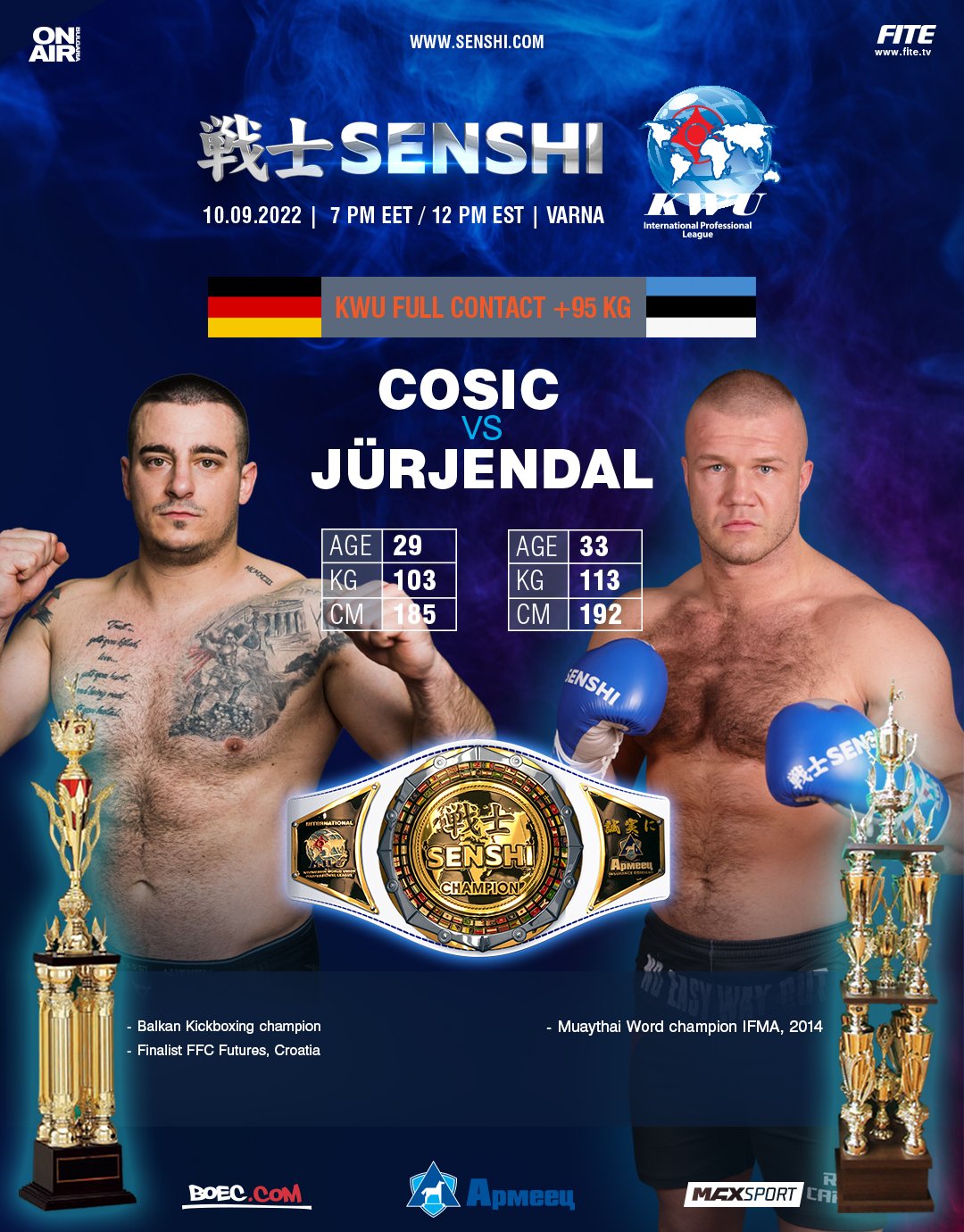 The fight night will be broadcast live on Bulgaria ON AIR and Max Sport 2 for Bulgaria, as well as in real-time worldwide on American television FITE, Senshi.com, kwunion.com Boec.bg, Boec.com and Kyokushin Karate News.

SENSHI is organized in cooperation with the Professional League of the World Kyokushin Union (KWU International Professional League), as well as with the special support of Armeec Insurance Company, MAX Sport, Bulgaria Air, and M Car Group – BMW dealer.