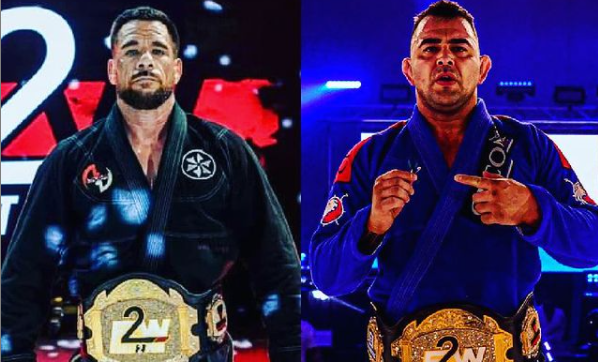 It was another exciting night of superfights at F2W 177, with two titles on the line in the main event.

First, Maria Malyjasiak and Kendall Reusing went head to head in what ended up being a quick match for the middleweight gi title. Then, in the co-main event, Pedro Marinho and Davi Ramos went head to head in an action-packed match that saw both of them tumble right off the stage. Finally, in the main event, Rafael Lovato Jr. and Alex Ceconi faced off for the masters heavyweight gi title.

Malyjasiak pulled guard and established grips as Reusing immediately applied heavy pressure to attempt an over-under pass. She got a hold of Malyjasiak’s leg and went in for a toehold, but Malyjasiak countered with a toehold of her own. After just a few seconds, Reusing verbally tapped, and Malyjasiak took home the win at just a minute and six seconds into the match.

Maria Malyjasiak was declared the winner by submission and claimed the middleweight gi title.

The match started off with a bang, with some wrestling on the feet leading to Ramos falling off the stage in the first few seconds. Once he was back on the canvas, the competitors continued to aggressively try to establish control, with Marinho focusing particularly on the collar tie as Ramos worked to shake him off. About three minutes in, Marinho shot for a takedown that nearly sent Ramos off the stage again, but it wasn’t enough to bring the match to the ground. Another forty seconds went by before Marinho attempted another takedown, though Ramos was able to step out of danger in time.

Just past the four-minute mark, Ramos pulled guard, and Marinho worked to pass for a little under a minute before Ramos returned to his feet. From there, Ramos picked up the pace, going for a takedown that nearly spun him off the stage again. More hand fighting, and then Marinho tried for a trip and instead ended tumbling backward off the stage. He went for a double-leg at about the two-minute mark but was stopped by Ramos’ defense again. Ramos pulled guard again and tried to come up for a sweep, but Marinho thwarted the attempt. Ramos returned to his feet and a scramble ensued before they returned to the center of the stage.

With a little over 30 seconds to go, Marinho leaped up for a flying submission and underhooked his opponent’s leg, and Ramos pulled his arm out, recovered his balance, and pulled guard. Marinho dove forward and put heavy pressure onto Ramos’ chest, but was unable to free his leg to pass to side control. He returned to his feet with seconds to go, and Ramos followed suit before pulling guard one more time before time ran out.

Pedro Marinho was declared the winner by unanimous decision.

Lovato started the action by pulling guard, coming up for a sweep with Ceconi’s leg wrapped up. Ceconi attempted a hip throw from there, but Lovato successfully defended. Ceconi then went for a trip and brought Lovato to the ground. Lovato didn’t stay on the bottom for long, however, coming up and sweeping his opponent in seconds. He tried to flatten out Ceconi’s legs to pass, and Ceconi was able to counter by moving to closed guard. Lovato stood up inside the guard and moved to a knee-cut pass attempt, and Ceconi rolled over and worked to get to his feet as Lovato sprawled on top of him.

A brief scramble led to Ceconi flipping over onto his back and Lovato coming back on top. Lovato applied heavy pressure on top of his opponent, while Ceconi worked to keep one of Lovato’s legs trapped in quarter-guard. Ceconi briefly wrapped Lovato back up in closed guard, and Lovato quickly stood up and broke it. Lovato returned to passing as Ceconi wrapped up lasso guard. Again, Ceconi wrapped his opponent up in closed guard, and again, Lovato was able to stand up and break it open.

Two minutes to go, and Lovato and Ceconi were engaged in a battle of passing versus retention. Lovato got the pass, and Ceconi managed to create the space he needed to roll up to his knees beneath Lovato’s sprawl. The competitors returned to the feet, and Ceconi pulled guard with about 30 seconds to go. Lovato stayed heavy on top of his opponent until the end of the match, and the decision went to the judges.