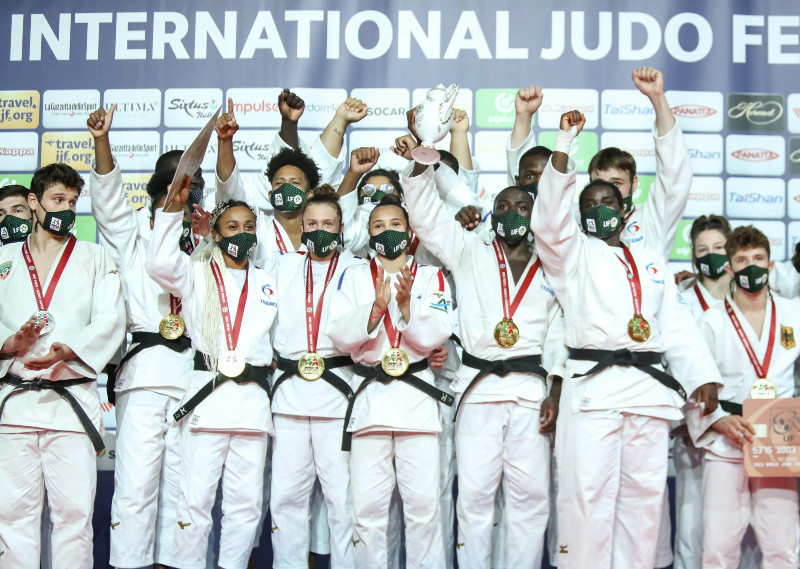 For Europe and the rest of the world, #1 seed France came in as the strongest team following the European championships in Luxembourg. There were given a first round bye whilst the remaining 15 teams battled it out. Ukraine tried their best against the French in the quarter final but it finished 4-1.

The same scored was achieved by Turkey in semi final which put them in to the bronze contest against Hungary. On the other side of the draw, Russia came out on top with a 4-0 win over India, 4-2 win over Hungary, and then in the semi final against Germany, experienced a 4-1 triumph.

In the bronze medal contests, it was a tense head to head between Germany and Ukraine they reached a 3-3 draw, but Ukraine only had five athletes standing on the tatami. In a very unfortunate case of bad luck, they drew the lightweight women’s category and so it was an automatic win for the German team.

It was equally as exciting between Turkey and Hungary and they went back and forth achieving with their wins. With a 3-2 lead, there was a lot of pressure on Ozlem YILDIZ of Turkey to take the fourth win and give her team the bronze medal. With so much support in the crowd, she went in confident and put a waza ari on the board within the first minute. She continued to control the contest in to the final seconds and made the score 4-2.

Joan-Benjamin GABA (FRA) was out of luck in his individual competition however he came back in full force for the team event, helping his team to the final and was first up against Saikhan SHABIKHANOV (RUS). This went in to golden score and through a flurry of attacks from the French, Shabikhanov was given a third shido, France 1, Russia 0.

Melodie TURPIN was next up for France against Daria VASILEVA who made it a 2-0 race with a single waza ari score. Returning to the mens -90kg, the -81kg Junior European bronze medallist Daniil DRANOVSKII (RUS) took on Francis DAMIER. Already with great momentum, Damier continued the French takeover, leaving it up to the Junior world champion, Coraline HAYME to make it a clean run for the French team.

Though Alana ALBOROVA (RUS) gave a stellar effort, it wasn’t to be for Russia and once again, France came out on top, now holders of the junior European and world titles in 2021.