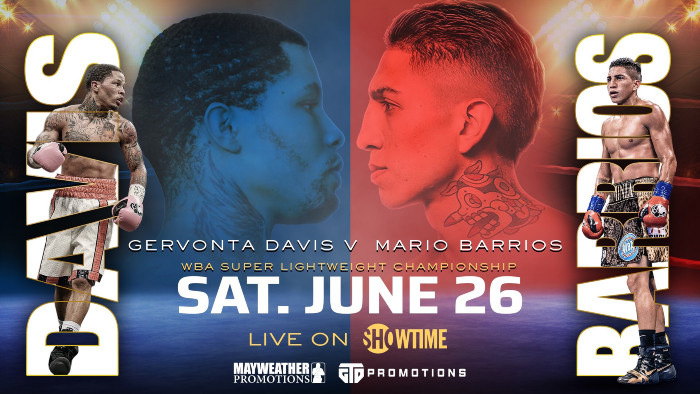 Gervonta “Tank” Davis made a successful splash in the 140 lb division, over-powering Mario Barrios in tonight’s Showtime pay-per-view main event in front of a hot crowd in Atlanta.

Davis (25-0, 24 KO) had some problems with the big height and reach advantages of Barrios (26-1, 17 KO) early in the fight, and probably lost the first four rounds. But from the fifth round forward, Davis was able to get closer to Barrios, take away his jab some, and the fight heated up significantly.

Davis had a good run from there, though Barrios wasn’t shying away from contact, either. The tone of the fight dramatically changed in the eighth round, when Davis scored two good knockdowns and looked on the cusp of putting it away. He didn’t, though, as Barrios showed great warrior spirit and was able to get through the round, having a strong ninth and getting some respect back from his opponent.

But Davis had another solid round in the 10th, then dropped Barrios with body shots in the 11th. Barrios did get up, but with Davis charging, referee Thomas Taylor stepped in for the stoppage.

The win does give Davis a paper belt in the division, the WBA’s “world” (aka “regular”) title, but this is a weight class with a true, undisputed champion in Josh Taylor. Far more important than counting belt collections is that Davis showed even if this isn’t his best weight — and it’s not — he is still seriously dangerous, and his power came with him tonight. Given more time to adjust to 140, he might get even better. He will always be small for the class, but Manny Pacquiao was small for these classes, too, and he did OK.

“I made it tough on myself. I could have made it easier, but it is what it is. I went up two weight classes and got the job done,” Davis said. “I was trying to catch him with some clean shots. I don’t want to throw just any type of shot. Eventually I caught up with him.”

Davis refused to call anyone out or state what weight he might fight at next.

“A lot of people are not good at this, but I’m a team player. Whatever my team tells me to do, we’ll get the job done,” Davis said. “I got the best team in boxing. I’ve been following them thus far, so let’s do it.”

Showtime interviewer Jim Gray tried to press Davis to actually make a call-out, trying to refuse to accept what Davis had just told him — all of which is consistent with his career to date — which was weird, but what can you do?

“Congrats to Tank, he came in here and did his thing. It was an exciting fight,” Barrios said. “He walks away tonight the better man, but I’ll definitely be back. Tank’s explosive. He caught me slipping. It’s boxing, and one punch can change a fight. Congrats to him, I’ve never been a hater.”

“I wanted to continue, I got up for a reason,” Barrios added. “I’m willing to leave everything in the ring, and I hope everybody enjoyed the fights tonight.”