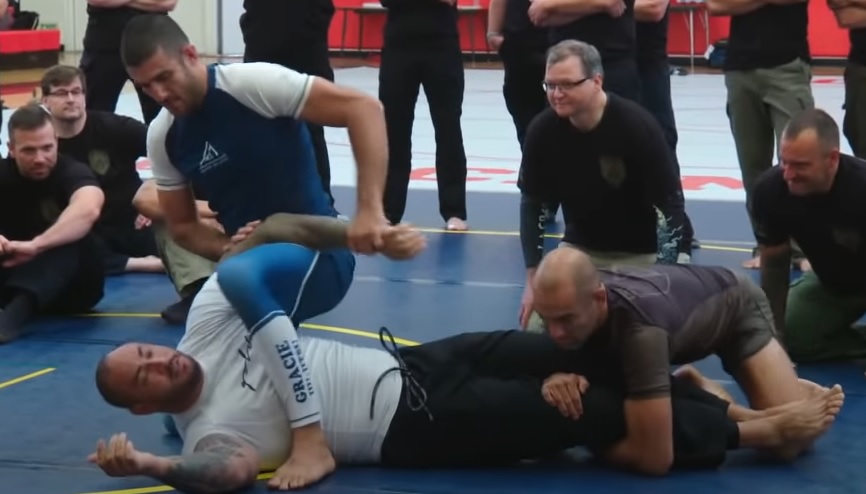 The program in Marietta, Georgia has reduced injuries to suspects by 53%, and injuries to officers by 48%. If you scuffled/resisted arrest with a Marietta Police Officer, you were 200% more likely to be injured by a non-jiu-jitsu officer than someone who had been through the mandatory program or was a practitioner of Jiu-Jitsu.

This information came on the recent episode of Real Sports with Bryant Gumbel that dove into the Marietta Police Department’s Brazilian Jiu-Jitsu training.

Bryant Gumbel sat with Rener Gracie and asked, “Is the goal fewer viral videos or is the goal better outcomes?” Rener responded, “The goal is to repair relationships between communities and the law enforcement agencies that serve them.” He continues, “we happen to have a solution that is so desperately needed by every police officer in America right now because this is what we do. This is what I was born around.”

Describing BJJ to his non-martial artist viewers, Gumbel describes the art as such, “It’s a system of holds and locks called Brazilian Jiu-Jitsu, or BJJ. And for years it’s been used by the fighting Gracie’s to subdue their rivals. No matter how big or how strong. No muss and no fuss… It’s the part of any MMA fight that’s the least bloody and most boring.”

Rener follows, ”Because of its inherently non-violent nature, it allows us to [neutralize our opponent] at the most gradual progressions… The philosophy is absolute: The least amount of force necessary to neutralize the aggressor and their threat to us.”

The episode shows officers training at Borges Jiu-Jitsu in Marietta, and interviews Officer Luis Valdez who recently used his training while on the line of duty. “He tried to push me away, but with the training I received, I was prepared for this.”

Gumbel’s report isn’t free of counterpoints, though. Seth Stoughton, a law professor at the University of South Carolina and was police use of force expert witness in the trial of police officer Derek Chovin for the killing of George Floyd, disagrees with the training program. “As much as I like and respect BJJ as a martial art, I don’t think painting policing over with a BJJ brush is going to change the industry.”

Evidence from Major Jake King of the Marietta Police Department shows the program’s effectiveness, “So, then I started researching more, and we reduced injuries to suspects by 53% [based on the deployment of Brazilian Jiu-Jitsu in patrol]… If you scuffled/resisted arrest, you were 200% more likely to be injured by a non-jiu-jitsu officer than someone who had been through the mandatory program or was a practitioner of jiu-jitsu. Then I went through the worker’s comp claims… And we saved almost $70,000 in the first year. Significantly less than what the program cost us, that’s for sure.”

Watch the segment for yourself here.