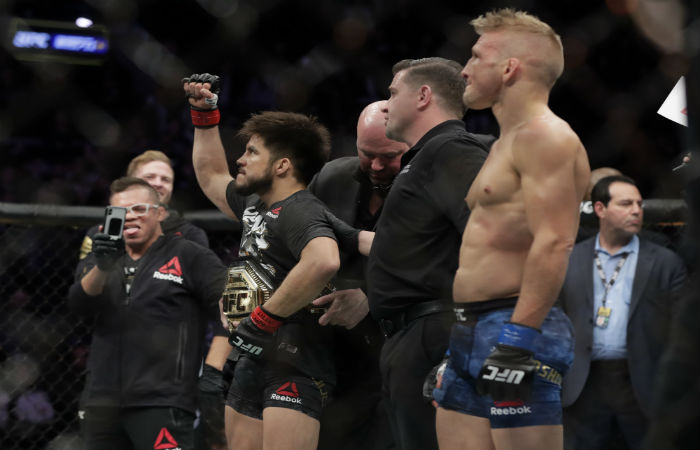 T.J. Dillashaw’s recent drug test failure left a vacuum in the UFC bantamweight division’s title landscape. In order to fix that, company president Dana White revealed that plans are to book a fight between Henry Cejudo and Marlon Moraes for the now vacant 135-pound title.

On Monday’s episode of Ariel Helwani’s MMA Show on ESPN, both Cejudo and Moraes foresee their fight taking place at UFC 238 in June. But even with nothing finalized just yet, “The Messenger” already sent a strong verbal statement to his opponent.

“Marlon Moraes I got a message for you… If you think you’re going to be the second heart I break this year, man I hope you’re ready, brother,” Cejudo said (transcript by BJPenn.com). “I really do, man. I’m not afraid of you. I’m an Olympic champ, I defeated Demetrious Johnson, I defeated TJ Dillashaw, you think a World Series of Fighting former champ is gonna scare me?

“I’m gonna shut your lights out and I’m gonna tell you something now, I already have my next opponent in line.

That next opponent is former lightweight champion Frankie Edgar, who trains with Moraes under Brazilian Jiu-Jitsu black belt Ricardo Almeida in New Jersey.

The 37-year-old Edgar last saw action almost a year ago, when he defeated Cub Swanson in their rematch. He withdrew from a November bout vs. the Korean Zombie due to injury, and hasn’t been booked since then.

All three fighters — Cejudo, Moraes, and Edgar — have the same manager, Ali Abdelaziz.

UFC 238 is scheduled to take place on June 8th in Chicago. One of the confirmed fights on the card is Valentina Shevchenko’s first title defense against Jessica Eye.