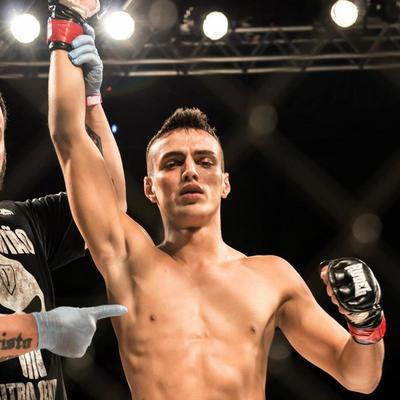 Ricardo Ramos added another UFC finish to his growing collection at UFC on ESPN+ 22 in Sao Paolo, then revealed that a Brazilian soccer legend inspired one of the eye-catching techniques he landed during the bout.

Sao Paulo’s Ramos (14-2 MMA, 5-1 UFC) finished Eduardo Garagorri with a rear-naked choke, but it was an unusual kick that he landed on the Uruguayan that was the topic of conversation when he chatted with ESPN backstage after his fight.

“I’m Brazilian. I’m a soccer player, you know? It’s a soccer kick,” he said name-dropping a 2002 World Cup hero as the inspiration behind the technique. “Ronaldinho ‘Gaucho’ used to use this kick in soccer, and Anderson Silva did that in one of his fights. I started trying that in my training and it really works, and it really hurts. It’s not only a trick. I like to use that to make my opponent confused and throw some different stuff. So that’s a nice kick.”

Ramos’ Ronaldinho-inspired kick may have caught the eye, but it was his Brazilian jiu-jitsu skills that secured the victory when he locked up the rear-naked choke for the win.

“I’m from jiu-jitsu, so every time I’m on the ground I know what to do,” he said. “I just saw it and attacked the neck.”

The event also marked the start of a new chapter for Ramos, who moved up from bantamweight to featherweight for the contest. And the 24-year-old said the move to 145 pounds has already been a gamechanger for his career.

“I did the best move of my life when I moved up to 145, and now I feel like I’m really at 100 percent of my performance – and that’s a good feeling,” he said. “Before, I had to not push too much because the weight cut was too hard for me, and that changed the performance of my fights.”

Comfortable at the higher weight and fighting in his home town, Saturday proved to be a memorable night for Ramos, who was cheered to victory by his family and friends.

“That’s awesome for me,” he said. “My father is in the crowd. My mother, my brother, all my friends are here. Fighting in front of all my friends, in my home town, that’s a feeling I’ve never tried. And today I did that, and I can’t explain with words – I just feel with my heart.”