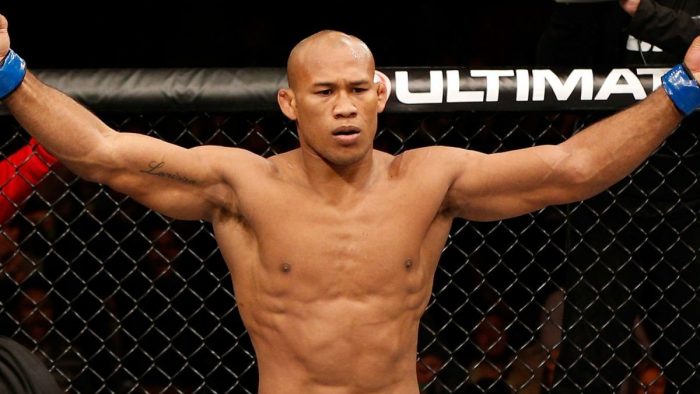 Jacare Souza isn’t ruling out a return to middleweight for his next UFC bout after a disappointing debut as a light heavyweight.

“Jacare” lost a lackluster five-round decision to Jan Blachowicz in the main event of UFC Sao Paulo on Nov. 16, dropping to 2-3 over the last two years, and he told MMA Fighting he’s still discussing his next move with longtime head coach Josuel Distak and new manager Andre Pederneiras.

“My manager and my team are talking which weight class I’ll fight next, so there’s a lot going on here right now,” Souza said. “We’ll make a decision really soon on what’s best for us. We’re looking at staying at 205 or going back to 185.”

Jacare, who has shared cages with big opponents in the past, admits he was surprised by Blachowicz’s size when they entered the Octagon.

“I didn’t expect it would be so tough (to take him down),” Souza said. “I was also surprised by his size. I trained with heavyweights for this fight and this guy is really big [laughs].”

The jiu-jitsu ace told MMA Fighting prior to the fight that he decided to move up to light heavyweight since he “always cut too much” for middleweight, and saw the 205-pound weight class as the “happyweight” division.

That said, Souza is willing to cut back to 185 pounds again in the future.

“Everybody suffers cutting weight, that’s life, but I’m 40 years old,” he said. “I cut weight my entire life and maybe I was full of it, but I’m excited again, I’m happy, and I want to work. I’m still one of the top fighters of the division.”

Regardless, Souza sees the glass half empty following his decision defeat to Blachowicz in Sao Paulo.

“Everybody expected (Blachowicz) to go there and kill me,” Souza said with a laugh, admitting he has yet to re-watch the bout. “I thought he would come more aggressive and try to knock me out, but he didn’t take many risks to avoid going to the ground. The result wasn’t what we expected, the fight was boring, but that happens sometimes.”

One of the factors that may have affected Souza’s performance is the fact that he caught pertussis a month before UFC Sao Paulo and only stopped taking antibiotics five days before the fight.

Jacare is still dealing with the contagious bacterial disease almost two weeks after the bout, but won’t use that as an excuse.

“I started coughing a month before the fight and couldn’t sleep,” Souza said. “I could barely train, I couldn’t breathe. It was awful. The doctor in the U.S. treated it as an allergy, but one day I called with my doctor in Brazil, Dr. Rodrigo Mauro, and he asked for exams that showed it was f*cking pertussis.”

Looking to get back to training soon, the Brazilian fighter is aiming to fight again “in four months.” The UFC is scheduled to return to his home country on March 14 with UFC Brasilia, but Jacare has no preference for any particular event.

“I’m feeling happy again,” Souza said. “I haven’t been this excited in a long time. Even though I lost, I’m excited. Let’s go for the next one.”