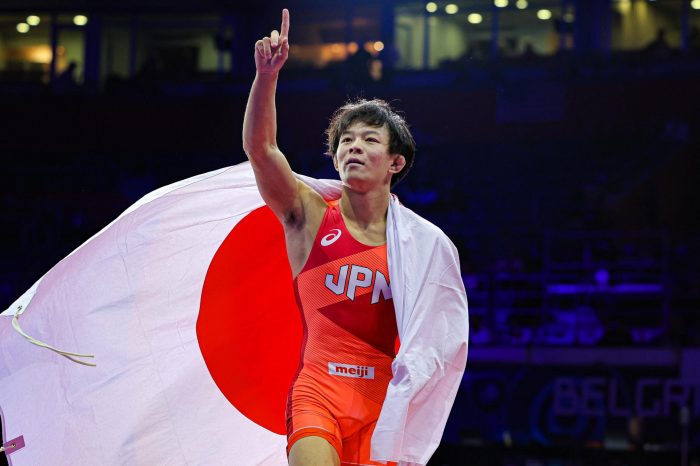 After quixotic attempts to make Japan’s team to the Tokyo Olympics at both 57kg and 65kg ultimately failed, 2016 Rio Olympic silver medalist Rei HIGUCHI (JPN) settled in at 61kg for now.

He now has his first senior world title, although it had never really mattered to him before. Higuchi put on one final, dazzling performance in sweeping past Reza ATRI (IRI) by 10-0 technical fall to win the 61kg gold as the World Championships concluded with the final three freestyle finals on Sunday in Belgrade.

In other finals, Asian champion Rahman AMOUZAD (IRI) signaled a possible changing of the guard at 65kg when the 20-year-old won the gold in a 21-point thriller, while Kyle SNYDER (USA) was hardly troubled in securing his third career world gold and first since 2017 at 97kg.

Higuchi, who won his first senior Asian title in April, had Atri on his heels from the get-go, working his slick tackles to perfection and transitioning well into exposure situations.

The 26-year-old Japanese opened with a double-leg takedown to a lace-lock roll. He then got 2 with a single-leg tackle, secured an inside-leg hook, and forced Atri over for two exposures to end the match at 2:42.

With Higuchi’s victory, Japan finished a surprising third in the team standings with 70 points, two ahead of Mongolia and Georgia. The United States, which had clinched the team title after the morning session on Saturday, finished on top with 198 points, followed by Iran with 150.

The bulk of Japan’s points came on gold-medal runs by Higuchi and Taishi NARIKUNI (JPN), the champion at 70kg on Friday. It marked the first time that Japan had two gold medalists at the same World Championships since 1979, when Yuji TAKADA (JPN) and Hideaki TOMIYAMA (JPN), the latter currently the president of the Japan federation, won in San Diego.

Such trivia doesn’t really interest Higuchi. He was more excited about surpassing his coach Kenichi YUMOTO (JPN), who won Olympic silver in 2008 and world bronze in 2011.

Higuchi’s run to the world gold caps the roller coaster ride his career had been on since he took the silver medal at the 2016 Rio Olympics when he was dealt a close 3-3 loss in the final by Vladimir KHINCHEGASHILI (GEO) on a late activity point that still stings for Higuchi.

For the Japanese wrestlers, the qualifying path for Paris begins with the All-Japan Championships this December, the first of two domestic qualifiers for next year’s World Championships.