Jason Knight even lost a tooth in his BKFC debut 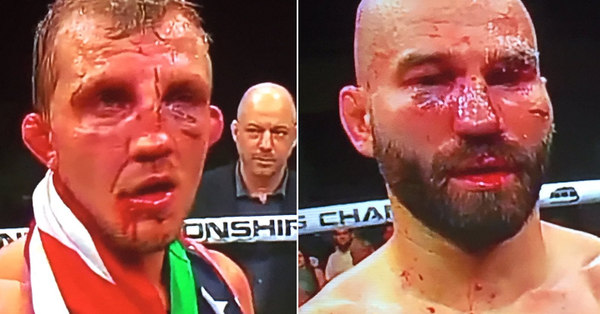 In MMA, Jason Knight was a man of many nicknames — “Hick Diaz,” “Mississippi Mean,” and “The Kid,” depending on the fight and the mood. In bare knuckle boxing, the sport he debuted in this past weekend in Biloxi, Miss. with the BKFC, he somehow lived up to all of those names.

And though he didn’t walk away with a victory against Artem Lobov in Saturday night’s main event, he came away with some fresh souvenirs: Twelve different kinds of stitches to close up multiple lacerations on his face, a hand that ballooned to nearly double its size, and a wrist that was still bothering him on Monday. If there was any consolation, it was that he left Lobov in nearly an equal traumatic state.

The only thing he sacrificed in front of his hometown fans? An incisor. Knight spit out a full tooth after a big Lobov uppercut, stared at it for a split second as if to savor its freedom, and then proceeded to try and divest Lobov of one of his own.

“If you go back and watch the fight — I’ve watched it, and I’ve watched the highlights — there’s one video where he punches me and my head slides back and it looks like I lost a couple of teeth, but I guess that was spit or something,” Knight told MMA Fighting. “But in the first round he caught me with a nice uppercut and I dropped to my knee, and whenever I stood up I spit out a tooth.

“Now I’m going to get an implant or some shit there. It broke off clean at the gum, like right at the root, nothing I could do about it. I don’t know why, but nothing on my face hurts. As soon as he broke that tooth off, it hurt, but it was go time. I was like, you bastard, you broke my tooth, now I’ve got to break one of yours.”

Instead Knight socked Lobov in what became a five-round, instant classic on the bare knuckle circuit. A picture surfaced afterwards of each man looking like slasher film survivors. In Knight’s case, it was as if a deranged man had just risen after some calamity or other, as he has gashes all over his face, and — some feared given how swollen it was — a fractured orbital bone.

“Of course you’re going to get that against Artem, that guy is tough as nails. But it wasn’t just him. My face is as thin as paper, so of course I was cutting easy.”

After the fight, Lobov was transported to a local hospital for further evaluation. BKFC wanted Knight to go, too, but…well, who better to explain how it went down than Knight himself.

“After my fight, I went back to the medical table and got stitched up, and they wheeled Artem off on a stretcher and shit, to take him — they said ICU, but it couldn’t be ICU, they were taking him to the emergency room,” he says. “Anyway, they were taking him away on a stretcher, and I wasn’t going to be that guy. They wasn’t taking me out of there on a stretcher, and I wasn’t going in no ambulance. So what I did, after they were done stitching my face I went and drove myself to the hospital.”

Technically Knight’s girlfriend drove him to the hospital, where he underwent a CAT scan to rule out concussions. They checked for broken bones, and fortunately none showed up. Knight got through a 10-minute bare-knuckle brawl with most superficial and cosmetic injuries. “It was a lot of fun,” he says. “Don’t get me wrong, the only thing about the bare knuckle — the thing that kind of sucks about that — is I know that I can’t have too many more of them grueling ass wars like that in bare knuckle.”

Heading into his fight, Knight trained with his coach Blake Singley and his friend Brok Weaver, the latter whom came up under a now retired boxing coach named Johnny Smith. “He’s the best boxing coach that ever lived,” Knight says, pointing out that his system has been transferred down through his cornermen (and himself).

Though he lost his few fights in the UFC and ended up being cut, Knight — at just 26 years old, and full of piss and vinegar — appeared tailor-made for the exposed knuckle. Something about the taboo nature speaks to his mentality as a fighter, which was always a little more extreme than his colleagues. Still, he’s unsure if he’ll next appear in a bare-knuckle ring or in a cage with gloves on his hands his next time out.

Much of it depends on what comes his way.

“Bare knuckle, they’re talking about possibly giving me the winner of Paulie [Malignaggi] versus Artem,” he says. “And that does not sound like a bad gig, you know what I mean? I find out in a few days exactly what I made. I’m still not 100 percent sure, still waiting on some PPV points to come in. I’m not real sure, but the way it’s looking is that, it’s looking like I’m going to make more than I ever did in a UFC fight, even with the bonuses. I’m not 100 percent sure, but that’s what we’re hoping on.”

“If I can get a couple more fights and take care of my family for a long time, I’m going to do that. But if the UFC, ONE Championship, Bellator, whoever comes after me, and they’re talking about paying good money, then I’m down for that. Of course I love to fight. Don’t get me wrong, I absolutely love it. I’ll fight you in my backyard for free tomorrow. That’s my mentality, that’s how I live. But I’m thinking about my family and my future.”

The one thing that was certain for Knight: He won’t soon forget the reception he received from the Mississippi natives who showed up to watch him do what he loves. “They were raising hell,” he says. Nor will he ever look at the man who stood in his wheelhouse and traded with for five ridiculous rounds the same.

“I told everybody that it was going to be electric, something memorable,” he says. “And I think that we went out there and put on a fight that nobody’s going to forget about for a long time.”

“I’ve watched it over and over again, and I think I won the fight. They gave him a couple of knock downs that weren’t really knock downs. They counted a couple of slips for him. Regardless, we went out there and put on a war. He displayed his heart, I displayed my heart, I have nothing but respect for that man.

“The man is a class act, and I have nothing but respect for him. As long as we’re not fighting I’ll be rooting for him for now on. Of course, maybe one day we’ll get to run it back bare knuckle, or the UFC, or ONE, it doesn’t matter. I would be honored to steer another performance with that man.”