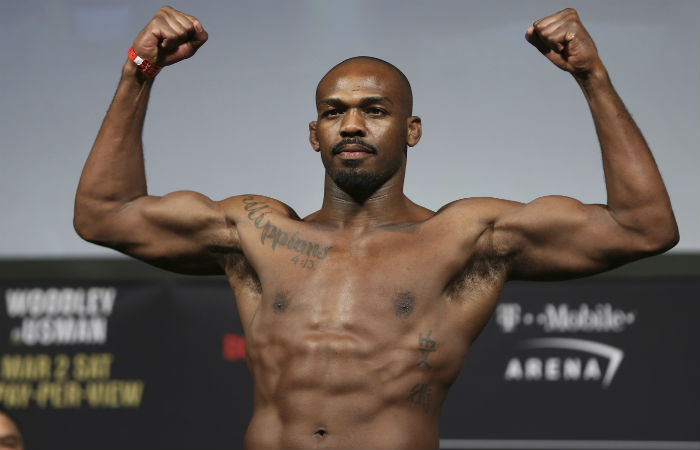 No one knows exactly what number Jon Jones wants to see on a contract to fight Francis Ngannou, but his coach Mike Winkeljohn thinks it could be massive.

Speaking to Submission Radio, Winkeljohn believes that considering the magnitude of a matchup between newly crowned heavyweight champion Ngannou and longtime light heavyweight king Jones, the fighters could be looking at a Floyd Mayweather Jr.-level payday.

Jones and UFC President Dana White are currently embroiled in a public war of words over negotiations for the hypothetical bout, with White wondering if Jones’ social media comments are sign that he might not actually want to fight Ngannou, and Jones furiously responding with a demand that the UFC release him.

Winkeljohn sees an Ngannou-Jones fight as potentially lucrative for all parties involved, especially if the UFC is willing to shell out the big bucks for Jones.

“Gosh, I look at the big fights,” Winkeljohn said (transcription via Submission Radio’s Denis Shkuratov). “I think this fight can be easily as [big as] some of the big Mayweather fights out there. What did Floyd Mayweather make? A hundred million? I don’t know. You know, that type of thing. [Mayweather] was kind of his own promoter. So, Jon’s gotta share that with the UFC as far as on pay-per-view buys.

“But I don’t see why it wouldn’t be a $50 million fight. And the UFC still makes bank, and is able to pay off a lot of the debt they have and go forward. I think the UFC needs a superstar like Jon Jones. I think Conor [McGregor] was the guy for a while, and he’s fallen off. But those big names is what makes the UFC money, ultimately.”

Winkeljohn hasn’t had an in-depth conversation with Jones about his social media activity, but he trusts that Jones has a plan even if it isn’t evident to the general public. He added that Jones’ coaches and team are behind him “one hundred percent.”

However, he doesn’t begrudge White for his handling of the situation either.

“You know what, Dana is the best in the world at the fight business, there’s no doubt about that,” Winkeljohn said. “And for a reason. Jon’s the best in the world for what he does, and for a reason. So, of course they each went their own [way]. To be expected. That’s the game. There is a fight game where he’s got to fight Francis, and at the same time he’s got that game, the UFC. They’ve got to decide how much they want to sell that many pay-per-views and how much is Jon Jones worth to them to sell that many pay-per-views.

“And Jon’s gotta decide, where is that point where I’m motivated to take that risk to continue at my legacy and being the best ever to play the game. Cause there’s always a risk. Someone can always slip and fall. People can fall in the bath tub. Something can always possibly happen. So, is it worth the risk? How much money is worth it to take that risk?”

With Ngannou now firmly entrenched as one of the hottest names in all of MMA, he has options outside of Jones, with past opponent Derrick Lewis looming as the most clear choice. Ngannou is as eager to see himself share the cage with Jones as anyone, but has no desire to hold up the heavyweight division if the negotiations between Jones and the UFC drag on.

Until the air clears between Jones and White, Winkeljohn can’t say with any certainty if the long sought-after bout ever comes to fruition.

“Oh, it’s a toss-up,” Winkeljohn said. “Like I said, nobody knows but those two at the end of the day. What Dana’s willing to give, and what Jon’s willing to take, nobody knows but those two. So, it’s up in the air right now. We’ll see. Who knows, there might be a fight in between, just because negotiations will continue. But I think in my heart eventually, the fans want to see it, that is the fight they want to see.