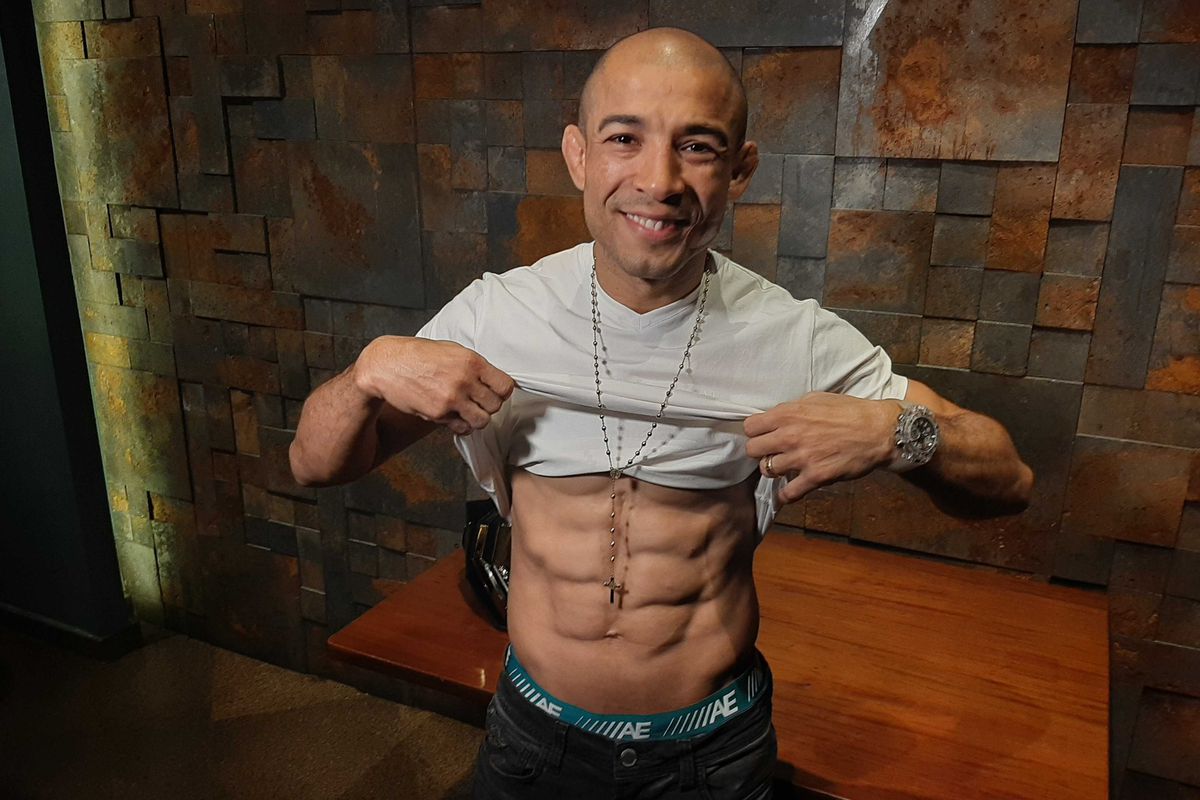 A quick look at Jose Aldo’s face and you’ll realize he’s not kidding about a future move to bantamweight.

The Nova Uniao star spoke with Brazilian reporters Monday night in Rio de Janeiro about “going on a diet for the first time in my life” and aiming for a 135-pound contest in December, preferably at the UFC 245 pay-per-view show in Las Vegas on Dec. 14.

“I’m on a diet for a month and my weight is dropping just fine,” said Aldo, revealing he currently weights around 150 pounds. “I’m training as hard as I’ve ever trained in my life, so I wouldn’t suffer to make featherweight now. My weight is going down well.”

“No doubt I’m fighting at 135 next, I’m just waiting for (Henry) Cejudo to decide if he’s going to fight or not,” he continued, aiming at the two-division champion. “If it’s not against him, I have no problem (fighting) anyone else. I’m asking ‘Dede’ (Pederneiras) every day, texting and terrorizing Dana (White). This f***** should at least come out of the bushes, you either fight or you don’t. All he does is talk that he wants to fight, this internet talk, but that’s easy. I wanna see you sign the contract to show you’re a real man and fight me or anyone else.

“Everyone who has two titles is holding up the UFC and that’s not good for me and all athletes that are hopeful for a fight. It’s getting hard nowadays. They say they’ll have an answer for me, but I’m waiting for this sh*t for a month.”

Aldo says he’s been asking the UFC for a fight since he lost a decision to Alexander Volkanovski in May. Aldo knows it’s highly unlikely that Cejudo fights again this year, so he’s willing to face anyone in the bantamweight division, and that includes former training partner Marlon Moraes.

“Anyone. I see no problems. I’ve never picked fights,” Aldo said. “It don’t think Cejudo will fight now, he’s just an actor in the media now, all he does is talk, send messages, calling people out for attention, but won’t sign the f***ing contract.”

“It’s like he’s already on his knees, he’s as tall as my knees, so I don’t even need to bend the knee,” Aldo added, responding to Cejudo’s constant messages to fellow fighters to “bend the knee to the ‘Triple C.’” “I just want him to sign the contract. That’s all. We’re all waiting for that. He talk and talks but does nothing. He won the 125-pound title and did nothing else. Olympic medalist, cool, let’s respect that, but he hasn’t done anything in the UFC.”

UFC president Dana White was against the idea of Aldo moving down to 135 pounds, but the Brazilian says he has convinced him that it’s going to happen. Aldo decided to move down after realizing it would be hard to have a trilogy bout with 145-pound champion Max Holloway, and says he’s been texting White pictures of him on the scale every day to prove he’s gonna hit the mark without any issues.

“He knows I’ll make the weight,” Aldo said. “We’re doing a great job with my nutritionists Maria Amelia and Priscila to get there really strong and well. Rest assured that we’re doing the right job and we’ll make weight just fine. I train with bantamweights and I’m stronger and more powerful than any of them. I’ll be strong and fast.”

At the end of the day, Aldo guarantees he’s gonna present a real problem for Cejudo’s title reign.

“The guy is short, let’s start with that,” Aldo said of Cejudo. “He has wrestling… No disrespect, he’s an Olympic medalist, cool, but taking me down is really hard, brother. I know that as soon as I have an opportunity I’ll land a knee and knock him out. Not only him but anyone else.