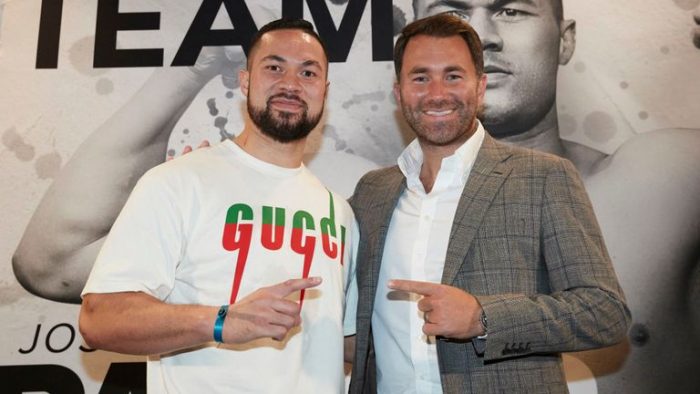 Joseph Parker still wants to make a fight before the year, after recovery of reported spider bite, says his manager David Higgins.

“He would love to return before the end of the year, absolutely”, Higgins told Sky Sports.

“He has recovered from what was a three-week lay-off and he’s back training, but that’s really a question for Eddie Hearn. He’s the promoter and we’re at their behest. We’re realistic and we’re just waiting to hear back from Matchroom.”

“He’s in good spirits, he’s back in training. I saw the British media sort of mocked the spider bite thing, but the honest feeling for the doctors, we think it actually was a spider bite.”

“I’m no expert, but it sort of destroys your immune system, your health. You are fatigued. He was ordered by medical professionals to stand down for three weeks.”

🇬🇧 2 British heavyweights – Which one will stay standing?

📺 Watch @DerekWarChisora vs @DavidPrice_1 – and @RPrograis vs Josh Taylor in @WBSuperSeries final on a bumper O2 bill on Oct 26 – LIVE on Sky Sports Box Office!

“Make no mistake, we wanted to fight Chisora, we still do. We’ll just see what happens.”

Parker will be watching Chisora with interest versus Price.

“It depends on how quickly Chisora can turnaround and whether Eddie Hearn or Frank Smith can pull some strings and get us on New York or Saudi Arabia,” said Higgins. “It would be a shame if Joseph had to sit out for eight months, but we remain hopeful.”

“He’s still in camp, his family are with him in Vegas. He’s sort of waiting. He is ready and willing, but hey, if not, we must be philosophical.”