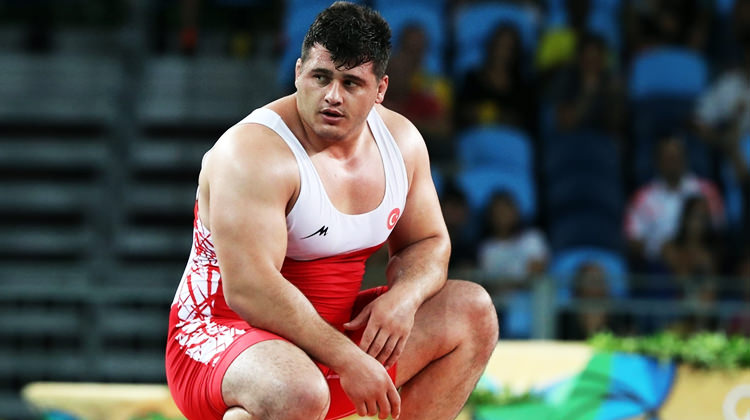 urkey’s Riza KAYAALP authored a new page in the Turkish wrestling history books on Saturday night by winning his ninth European title. Kayaalp entered the night tied with Hamza YERLIKAYA, who also had eight European titles, but surpassed Yerlikaya with his Day 6 win at the Polyvalent Hall in Bucharest, Romania.

In his 130kg gold-medal bout, Kayaalp scored three points from a stepout and a takedown to defeat Iakobi KAJAIA (GEO), 3-0.

Meanwhile, Vitalii KABALOEV, Stepan MARYANYAN, and Roman VLASOV circled the mat with the Russian flag draped above their head after wrapping up their Greco-Roman gold-medals matches early. Their trio of Saturday night gold medals gave the Russian Federation the 34 point lead over Azerbaijan heading into the final day of wrestling.

Kabaloev and Vlasov both ended their matches with opening period falls, while Maryanyan picked up the technical superior win in his gold-medal match.

In the 55kg finals, Kabaloev poured it on Romania’s Florin TITA and picked up the fall in the opening period. Before the throw that ended the match, the Russian scored a takedown, inactivity point, followed by a pair of two-point gut wrenches, and commanded the 7-0 lead before throwing his Romanian opponent to his back for the fall to win his first continental title.

Roman Vlasov also ended his finals match by a fall in the opening period. In the 77kg gold-medal bout, Vlasov scored two four-point throws, then planted Germany’s Roland SCHWARZ on his back and won his fourth European title.

In the 63kg finals, defending world champion Maryanyan blew through Rio Olympic bronze medalist Stig-Andre BERGE (NOR), 9-1, and won his second European title, but first since 2015.

Maryanyan scored an inactivity point and a pair of gut wrenches and held onto the 5-1 lead before capping off his run to a gold medal with a four-point throw.

The final gold medal of the night went to Ukraine’s Zhan BELENIUK. The second-ranked wrestler in the world at 87kg was the second non-Russian wrestler to reach the top of the podium and claim a gold medal on Day 6. In the finals, Beleniuk picked up a stepout and exposed Islam ABBASOV (AZE) using a four-point head pinch to grab his third European title with the 5-1 victory.

The finals day of wrestling at the 2019 European Championships begins at 18:00 local time, and can be followed live on www.unitedworldwrestling.org.