Khabib Nurmagomedov on Tony Ferguson: “I swear that I never considered him an elite lightweight” 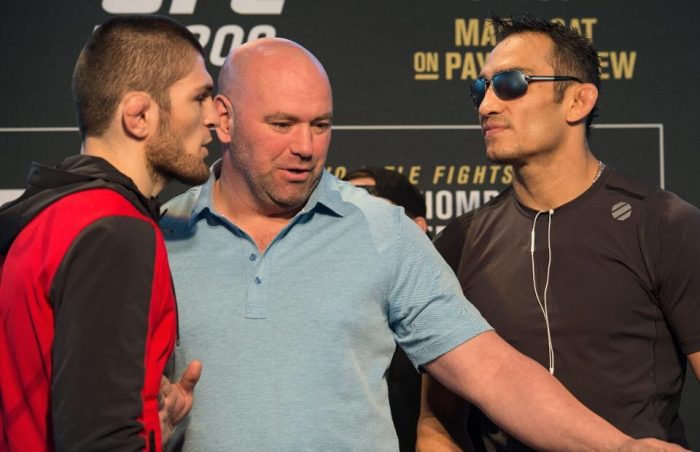 UFC lightweight champion Khabib Nurmagomedov said in a recent interview that he doesn’t believe Tony Ferguson was ever an elite lightweight.

Nurmagomedov and Ferguson were rivals for the better part of five years, but despite the UFC booking them to fight five times, the bout never came to fruition for various reasons. With Ferguson having recently lost back-to-back fights to Charles Oliveira and Justin Gaethje, and with Nurmagomedov likely set to retire from MMA, it seems like this is a dream fight that will never come to fruition. Though some fans still swear that Ferguson has the skill set that could be the kryptonite for Nurmagomedov, the champ has moved on.

Nurmagomedov recently sat down with his friend, Russian heavyweight fighter Magomed Ismailov, and spoke about Ferguson. Though the champ admits that he still thinks about the fight from time-to-time, “The Eagle” wants fans to be realistic. In his mind, Ferguson was never an elite lightweight and he hasn’t had any quality wins in recent years, so this isn’t a matchup that Nurmagomedov is interested in anymore (video via Bruno Massami).

“Maybe that would be Tony Ferguson, but I swear that I never considered him as an elite lightweight,” Nurmagomedov said.

“He was very good, but I never counted him so, because it’s impossible to be an elite at 37 years (of age). It’s never been before and Khabib cannot do this. At 37 years in the lightweight division, no way, but heavyweights can. It’s my opinion and you cannot change it. Secondly, since 2016 he fought Kevin Lee, Edson Barboza, Anthony Pettis, and Donald Cerrone and these four fighters have 20 losses for these four years. It means that since 2016 he didn’t fight good fighters. But now, he faced young and top fighters, I mean Charles Oliveira and Justin Gaethje. They outclassed him, you saw this. Both fighters just dominated Tony. I was just dreaming about this fight. But it wasn’t destined, we had injuries in a row.”

Nurmagomedov vs. Ferguson was a fascinating matchup at one point in time, but between all the injuries to both fighters, it just wasn’t mean to be. Although Ferguson does present a different skillset from many of Nurmagomedov’s opponents over the years, at age 37 his days of making a lightweight title run are likely over. Though Nurmagomeodv was harsh in his criticism of Ferguson, he is just letting fans know that this isn’t a fight that should be on anyone’s radar anymore.