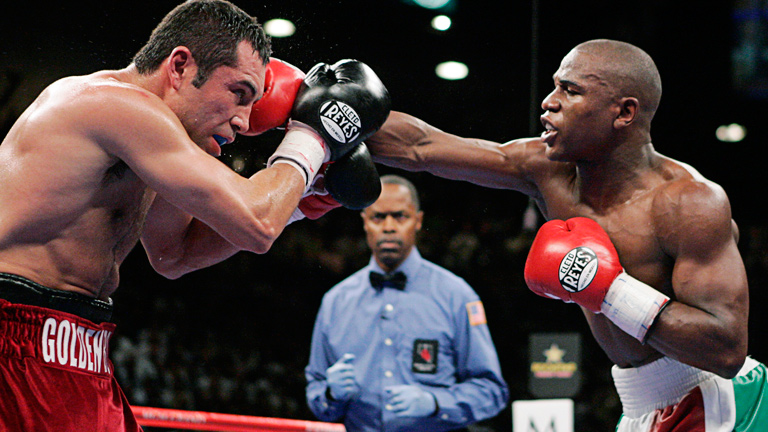 With Oscar De La Hoya set for a Sept. 11 exhibition against former UFC champion Vitor Belfort, the 48-year-old “Golden Boy” said on Saturday that his big goal is to do two fights (or, more likely, “fights”) and then have a rematch with Floyd Mayweather.

We questioned then whether or not Mayweather, 44, would have any interest in doing anything with De La Hoya — a real fight that counts on records far less likely, but an exhibition also probably unlikely. And Mayweather Promotions’ Leonard Ellerbe confirms that their side has no interest in De La Hoya, 14 years after Mayweather beat him in a huge pay-per-view event.

“Absolutely not, it’ll never happen,” Ellerbe told The Jake Asman Show on SportsMap Radio. “There is zero interest in doing it. Oscar De La Hoya’s just trying to use Floyd’s name to create some buzz about whatever he’s trying to attempt to do, and nobody’s really paying him any attention.”

Ellerbe also spoke about Mayweather’s recent exhibition with Logan Paul, which made some money but was largely panned.

“(Paul’s) whole objective and their game plan was to be able to go the distance, the eight rounds. And he was able to achieve that. He out-weighed Floyd by 50-plus lbs on fight night, the exhibition. His whole objective was to survive.”

Ellerbe also took some time to promote Saturday’s Showtime pay-per-view, featuring Gervonta “Tank” Davis taking on Mario Barrios in the main event, and said Davis doesn’t get enough credit from some of the media and fans.

“(Tank) is the most exciting fighter in the sport, period. That’s something he doesn’t get enough credit for,” Ellerbe said. “Not comparing Floyd with Gervonta, but the same kind of things happened with (both).

“I understand what this process is, and I’ve had some great conversations with Tank, telling him not to worry about the media and how they perceive this and that. Just focus on the guys we put in front of you, because at the end of the day when his career is over, he’s gonna have a great legacy and have made a ton of money.”