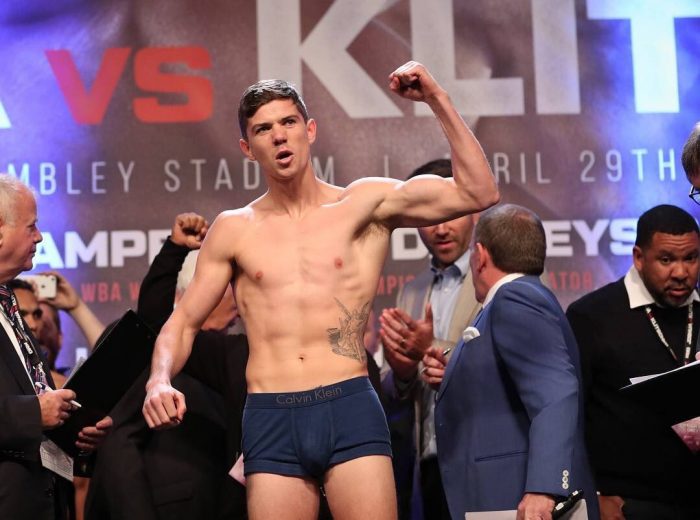 We’re just six days away from one of the most promising boxing fights of 2019.

This Saturday night at O2 Arena in London the WBO and WBA “Super” lightweight champion Vasyl Lomachenko (13-1) will put his belts in peril against the home crowd hero Luke Campbell (20-2), with the vacant WBC belt also on the line.

Although “Hi-Tech” is considered the strong favorite in this one, the 31-year-old Brit believes he’s up to the challenge and that he’s more than able to shock the world.

See you next week pic.twitter.com/UM9IF1BR0e

In one of his most recent interviews with GQ, the 2012 Olympic gold medalist talked about the upcoming fight, the calm before the storm and the odd sparring sessions he’s having in order to prepare himself for the Ukrainian boxer.

The fight is a week away now. Are you sick of talking about it?
It’s certainly getting that way. To be honest, I just want to get on with it. It is such a big fight, though, that I do understand people want to talk about it. A hell of a lot of people have been stopping me in the street, wishing me well. I am quite shy really, but I always try to make time to talk to people and have pictures taken. And it is certainly better to be in a fight that people want to talk about, rather than one that they aren’t interested in.

How are you feeling?
I’m feeling good. I’m in shape. I’m where I need to be. But, of course, I am feeling nervous. For me, you really need those pre-fight nerves to help you focus and switch on. The most important thing is to keep control of those feelings.

Lomachenko is considered the best pound-for-pound fighter in the world. Do you agree with that?
There is no question that he is good. He’s very, very good. But I don’t think he is unbeatable. I see this as my chance to put myself on that pound-for-pound pedestal and I totally believe I can do it. And I just refuse to engage with any negative thoughts that might come into my head. The thing with thoughts is that they are exactly that – they aren’t facts. So I don’t accept that he is unbeatable, that he is the best boxer in the world or that I don’t belong in the ring with him. I know I can beat him. He can get hit and he can get hurt. That’s boxing.

In terms of sparring, how do you prepare for someone as unorthodox as Lomachenko?
The only thing that I have been doing that is very different is sparring three people at once. So three guys in the ring against me.

That’s amazing. How did you find that?
It was good, but obviously, it is really difficult at first. You get punches coming at you from all angles and from unexpected areas, but it certainly makes you sharp.

What skills does he have that you particularly admire?
Do you know what? I don’t think I need to analyze what he does. This fight is not about him. This fight is about me and what I can do. I’m not going to base my training on what he can do and what he is good at. I am going to focus on what I can do and improve what I am good at. I don’t care what he’s good at… It’s all irrelevant. I’ve just got to be the best I can be.