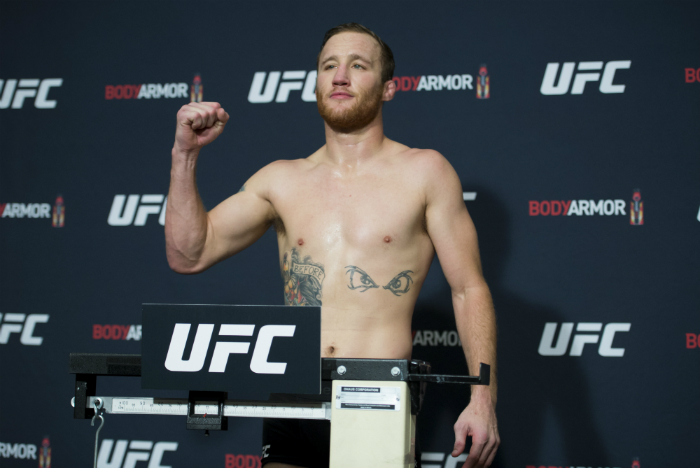 As far as Michael Chandler is concerned, he was beaten by the best.

Chandler lost a unanimous decision to Justin Gaethje in the main card opener of UFC 268 last weekend, the result of a three-round war that has been anointed as one of the leading candidates for Fight of the Year. It was bounce-back performance for Gaethje, who was competing for the first time since a failed bid to take the UFC lightweight title from Khabib Nurmagomedov in October 2020.

After going three unforgettable rounds with Gaethje, Chandler is certain that “The Highlight” should face the winner of the UFC 269 bout between champion Charles Oliveira and Dustin Poirier on Dec. 11.

“I think Justin Gaethje is the clear-cut No. 1 contender,” Chandler said on The MMA Hour. “He just beat me. [Islam] Makhachev, obviously the way he dispatched Dan Hooker was absolutely phenomenal. What he did was great. Does it warrant a title shot? Not compared to what Justin Gaethje has done, that’s my thought.”

“I think Justin Gaethje breaks Charles Oliveira,” Chandler added. “But the more likely scenario is Poirier wins that fight because I think he has more tools and he’s just better in certain areas and he’s not going to get submitted by Oliveira, even though we have seen an increased striking level by Oliveira, as we saw in our fight. But I think Justin Gaethje cleans up a couple of things, remembers how he lost to Dustin Poirier a couple of years ago, and I think he wins the title, middle of next year.”

Gaethje — the No. 3-ranked lightweight in MMA Fighting’s Global Rankings behind only Poirier and Oliveira — has not been guaranteed a shot at the UFC 269 winner, and the discussion has become muddled with Nurmagomedov campaigning for teammate Islam Makhachev over Gaethje. Makhachev, ranked No. 5, recently scored a quick submission win over Dan Hooker for his ninth consecutive UFC victory.

Heading into their fight, Chandler dismissed the suggestion that Makhachev could skip over Gaethje in the contenders’ line, and he has an even greater respect for Gaethje now that they’ve squared off. Chandler admits that he could have been more strategic in his approach to their fight, but also believes that he proved something in “The World’s Most Famous Arena.”
“Granted, was it the smartest way and the easiest path to victory to go win a fight against Justin Gaethje at Madison Square Garden, which really should have had title implications?” Chandler said. “Probably not, but I also can’t control myself sometimes. I’m here to entertain. I loved competing, I love fighting for the UFC, I love what the last 13 months has been about, and this was definitely a culmination. Fighting for the title a couple of months ago was great, but this was different. It felt historic, it felt like fight week we were leading up to a historic card as I’m signing the posters and as we’re going through everything and then it all culminated in a possible Fight of the Year candidate.

“A lot of people say it’s the best fight that they’ve ever seen, so to be in those types of fights, you have to take some damage and have some ups and some downs and get hurt here and win some, lose some in different moments. So it’s definitely a lot more fun to go knock someone out and collect a paycheck and go home and kiss your wife, but those knockdown, drag-out wars solidify to people that you’re still here and you’re legit.”

While Chandler spoke glowingly of Gaethje and their fight, he would not go as far as to say that he felt any sort of moral victory. However, he also feels that when it comes to battles like the one he just had, it isn’t always about wins and losses.

“Just the way that the fight happened, the atmosphere, the fans reactions, the UFC’s reaction, the media’s reaction, it feels like a win,” Chandler said. “Truthfully — and this is something I’ve been thinking about a lot lately and it really happened when I came to the UFC — are we there to collect wins and losses? Absolutely. Do we really want to win most of the time? Absolutely.

“But people aren’t going to remember wins and losses. They’re going to remember how you made them feel. I think the feeling that people got it was the epitome of why people love this sport was the feeling they got from me vs. Justin Gaethje at Madison Square Garden with everything on the line and two dudes who we did exactly what we said we were gonna do. You get a lot of bluster, a lot of trash talk, a lot of braggadocious puffed-up chest talking about being a fighter, talking about coming forward, getting in a guy’s face, being an exciting fighter, and some people just don’t deliver. Justin Gaethje and I said we were gonna do that and we did it. So we are men of our word in every sense of the word and I’m happy with it, man.”
If Chandler has his way, the next time he and Gaethje meet will be for a UFC title, which means fans could be treated to five rounds of non-stop action for a potential rematch. The fans were certainly demanding more at Madison Square Garden, and though Chandler takes satisfaction in knowing that their efforts were appreciated, he wasn’t looking forward to going 10 more minutes this time around.

“I’m glad it wasn’t a five-round fight,” Chandler said. “We both took as much damage as we needed to take in 15 minutes. He gets to go off and hopefully get that title shot, I think he goes and beats Dustin Poirier or Charles Oliveira, middle of next year, and then maybe we set up a rematch when I get a win or two and we’ll see what happens. But I’m glad it was only 15 minutes.”