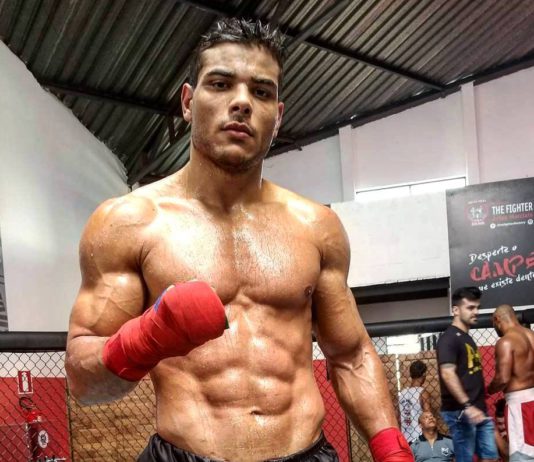 Paulo Costa has been suspended by USADA, but is eligible to return to the UFC immediately.

The UFC middleweight contender was handed a six-month ban by USADA, the UFC’s anti-doping partner, for the prohibited usage of an intravenous infusion (IV) twice in 2017, the agency announced Friday. Costa’s suspension is retroactive to Aug. 10, 2018, the date he acknowledged receiving the IV. The Brazilian fighter is already able to return to the Octagon.

Also included on the suspension is Carlos Costa, who USADA said administered Paulo Costa the IV. Carlos Costa is Paulo’s older brother. He is listed by USADA as “Athlete Support Personnel.”

USADA determined, using video and other evidence, that Paulo Costa received an IV of permitted substances, including saline solution and stomach medication (which Paulo Costa has identified previous as Plasil), after weigh-ins at UFC 212 in Rio de Janeiro without a therapuetic use exemption (TUE), per the release. Paulo Costa did the same thing after weigh-ins at UFC 217 in New York. The amount — more than 100 mL in a 12-hour period — was more than the allowable IV threshold set forth by the World Anti-Doping Agency (WADA) Code.

Paulo Costa’s IV use at UFC 212 also falls under the jurisdiction of the Brazilian MMA Athletic Commission (CABMMA), which has fined Costa $4,000 (a third of his purse) that will go to his opponent Oluwale Bamgbose. The New York State Athletic Commission (NYSAC) previously fined Paulo Costa $9,333.33 (one third of his purse) for the violation in relation to UFC 217. Neither commission will sanction Carlos Costa and Paulo Costa will not have his victories overturned.

“CABMMA has followed the entired process regarding the violation of the athlete, and recognized/agreed with the suspension imposed by USADA,” CABMMA executive director Cristian Sampaio wrote in a statement. “About the fine being reverted to Oluwale, it was a decision made by CABMMA to try to somehow minimize any eventual damage caused by him with that violation. CABMMA has been working alongside USADA since the implementation of its antidoping policy in MMA and supports its efforts to create a more fair and clean competition environment inside the sport.”

In 2017, at the time of Paulo Costa’s two usages of an IV, the method was prohibited by WADA at more than 50mL per a six-hour period, except during the course of hospital admissions, surgical procedures or clinical investigations. The threshold changed in 2018 to 100 mL per a 12-hour period, except for the legitimate usages mentioned above.

A video surfaced online in October 2018 of Costa apparently being administered an IV. The USADA investigation is what kept Paulo Costa, nicknamed “Borrachinha,” out of a fight this month with Yoel Romero at UFC Fort Lauderdale.

Under the “substantial assistance” clause in the UFC anti-doping policy, the Costas must continue cooperating with USADA regarding the information that was given. “Substantial assistance” can entail bringing forward another anti-doping policy violation by someone else or information that can result in criminal or disciplinary charges elsewhere. If the Costas stop cooperating, USADA could “reinstate” the original two-year suspensions.

Wallid Ismail, Paulo Costa’s manager, said the team is “satisfied” with the way the situation was handled, and “the important thing is that the case is over now.”

”We expect now to have him fighting Yoel in June,” Ismail said. “We’re just waiting for Yoel’s answer. Or anyone. He has to fight in June. I think Yoel… ‘Borrachinha’ has something personal with Yoel because Yoel said he was doping. That drove ‘Borrachinha’ crazy and it became something personal. ‘Borrachinha’ is really pissed off. You can say whatever you want, but you can’t lie, and Yoel lied.”