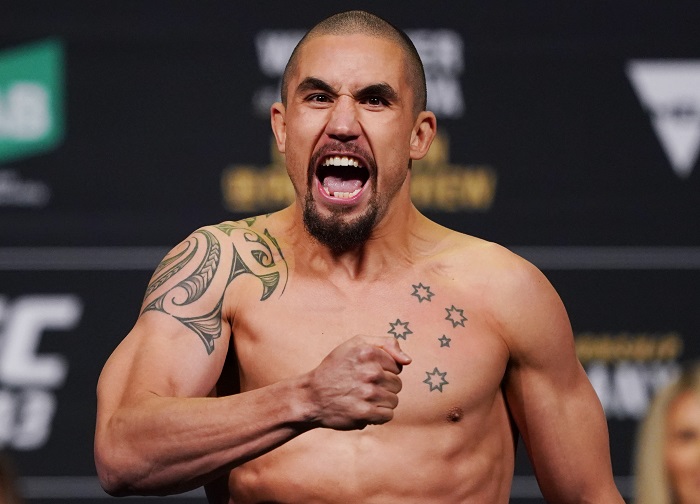 Robert Whittaker is looking confident to hammer another middleweight contender.

The UFC superstar meets Kelvin Gastelum in the main event of UFC on ESPN 22 on April 17, where he’ll look to cement himself as the No. 1 contender.

“I think I’m going to be too much for him,” Whittaker told MMA Junkie. “My striking is too crisp. I think it’s too fast. I think I’ve got too many weapons. He may try to take me down a couple of times, and I only think it’ll work to his detriment because it’s a five-round fight and wrestling takes it out of you.”

“I was pretty dead set on competing at the date that was originally put down,” Whittaker said. “I’d gone through most of the camp. All the work was done. I had organized my whole life around that date. So to be able to still compete on that date – thankfully Gastelum stepped in, and I’m still able to do that. I’m very fortunate.”

“I got upset at first. My OCD flared up, and I don’t like last-minute changes. But I started looking at the silver lining. I’m still very happy to fight at that date. All the work was done. I wanted to fight at that date. I wanted to get a fight in, and they’re all killers at the end of the day. It doesn’t really matter who it is that I’m fighting.”

Gastelum (16-6 MMA, 11-6 UFC) is a familiar face for Whittaker. The pair were scheduled to square off at UFC 234 in February 2019, but Whittaker was rushed to the hospital on the night of the fight due to emergency hernia surgery.

“Because I had been scheduled to fight him before, I had a lot of the work in the bank for him,” Whittaker said. “So I’m familiar with his fight style and his different habits. But also, I’ve fought a lot of southpaws. Till was a southpaw, so I was able to adjust relatively quickly.”

“Honestly, there’s no fight I look forward to. There’s no fight I particularly want to run or anything like that. I’ll fight whoever I’m supposed to. Whoever they put into the ring with me, I’ll go at. I do feel like I owe him a fight because we were supposed to fight and it fell through, so the fact that we get to cross paths now is better late than never.”