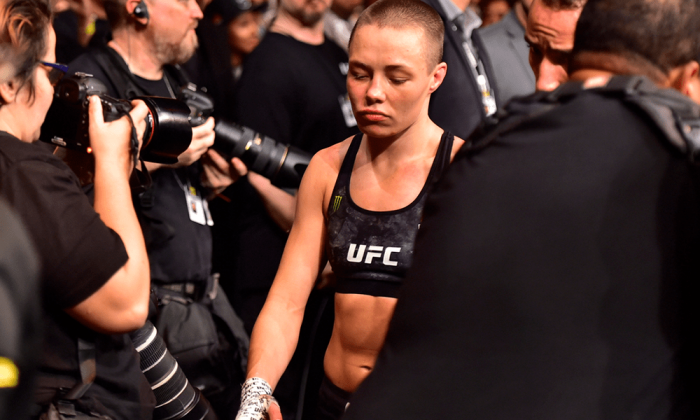 Rose Namajunas is now a two-time strawweight champion and her second reign started in similar fashion as her first.

Back in 2017 when she was a decided underdog to then champion Joanna Jedrzejczyk, Namajunas shocked the world by demolishing the Polish powerhouse with a first-round knockout. At UFC 261 on Saturday night, “Thug” Rose delivered a second jaw-dropping finish after blasting Zhang Weili with a head kick during an early exchange just after the co-main event got started to once again become the queen at 115 pounds.

The end came at just 1:18 in the opening round.

“I did it again,” Namajunas said with tears running down her face. “I am the best. I didn’t see her moving. I wasn’t sure she was going to come back from that. A couple of those hammer fists and that was out.

Prior to the fight starting, Namajunas could be seen mouthing to herself “I am the best” in the corner as Bruce Buffer made his announcements in the cage.

Once she was released from the corner, Namajunas was quick to establish her range while being wary of the supreme power coming back from Zhang, who throws with bad intention behind every punch.

A couple of early flurries got the action started but it was Namajunas stepping back and then unleashing the lightning quick head kick that sent Zhang crashing to the floor that had the Jacksonville crowd coming unglued.

As soon as Zhang hit the floor, Namajunas followed her to the ground with a few more shots and referee Keith Peterson saw enough to stop the contest. Afterwards, Zhang explained that she felt the stoppage was a bit quick but replays seemed to show she was definitely hurt and eating shots from Namajunas without offering much defense on the ground.

“I feel I can come back real quick,” Zhang said. “I was still conscious, the referee stopped it a little bit early.”

While she was certainly in a celebratory mood, Namajunas also took time following her statement win to comment on some pre-fight interviews where she addressed her disdain for Communism thanks to her Lithuanian heritage but then related that back to Zhang because she hails from China.

“All that stuff that was the in the media, that was not my intent to ever personally attack her as a person,” Namajunas said. “It’s just my history and my past and that’s it.”

Politics aside, Namajunas is once again the UFC strawweight champion as she starts her second reign atop the division with a long list of contenders now sitting behind her at 115 pounds.