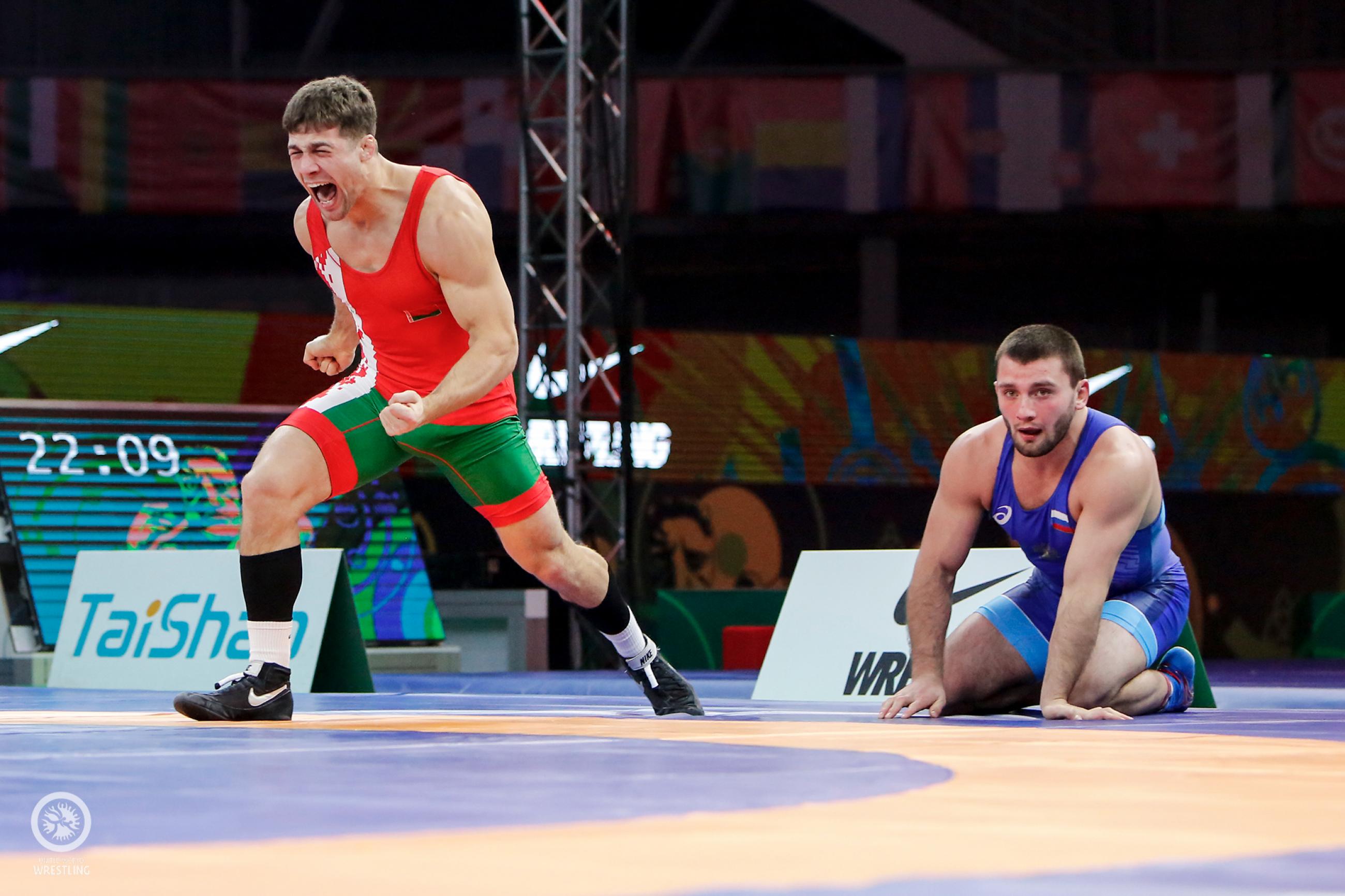 Russia and Georgia collected a pair of Olympic berths through Saturday’s Tokyo qualification round at the European Olympic Qualifier.

At 77kg, Chekhirkin stepped up big after replacing two-time Olympic champion Roman VLASOV (RUS) on less than a weeks notice. He squeezed out a 7-6 win over Aik MNATSAKANIAN (BUL). Chekhirkin, the ’17 world champion, faced a 4-0 deficit in the first period but scored six unanswered points and gained the two-point lead. He surrendered a takedown and fell behind 6-6 on criteria but snatched a stepout and earned Russia’s 77kg Olympic berth, 7-6.

His finals opponent will be now-two-time Olympian Bozo STARCEVIC (CRO). Starcevic qualified Croatia for the Olympic Games at 77kg with a 3-1 win over Oldrich VARGA (CZE).

Semenov was the second Russian Greco-Roman wrestler to book a ticket to Tokyo on Saturday. He was in such a hurry to get off the mat that he pinned Adam VARGA (HUN) in 98 seconds.

Georgia was the second nation that had a pair of wrestlers earn Olympic berths on Saturday.

Zoidze was the first Georgian to win a semifinal bout. He eased his way to a 9-1 win over the slim and slender Slavik GALSTYAN (ARM). He’ll wrestle Hungarian world champion Balint KORPASI (HUN) in Sunday’s finals.

Korpasi dominated Donior ISLAMOV (MDA), 6-0, and handed Hungary a spot at 67kg at the Olympic Games. He has world medals trickled throughout his resume, but the one thing the former world champion’s resume was missing was an Olympic appearance. At 33-year-old, that’s all going to change as he’s expected to be Hungary’s representative in Japan later this year.

Gobadze was Georgia’s second wrestler to claim an Olympic license on Saturday. Despite trailing early, the ’19 world champ emptied his gas tank and earned the 9-5 win over Milad ALIRZAEV (RUS). Gobadze’s come-from-behind win stopped Russia from earning an Olympic berth at each of the six weight classes.

Turkey came into the European Olympic Qualifier with four wrestlers who had high hopes of adding to their nation’s pair of Olympic berths. But after failing to reach the semifinals at 67kg, 77kg and 87kg, they turned to 21-year-old Kerem KAMAL (TUR) to save the day.

With the pressure of a nation on his back, the energetic spark plug dug deep against Erik TORBA (HUN) and ended Hungary’s 60kg bid for an Olympic berth with a one-point victory.

As always, Kamal came out on fire. He tossed everything he had into an early correct throw (six seconds into the first period) and controlled the slim 2-0 advantage. His Hungarian opponent was hit with inactivity and placed down in the par terre position. The two-time European medalist lost focus for a split second and surrendered a reversal and an exposure. Trailing on criteria, Kamal picked up what ultimately proved to be the match-deciding takedown before the first period came to an end.

He stayed composed in the second period and became the third Turkish Greco-Roman wrestler (97kg and 130kg) to punch his ticket to the Olympic Games with a 5-4 victory.

The German hit one of the craziest four-points throws to steal the Olympic berth from Murad MAMMADOV (AZE).

Kinsinger trailed 3-1 late in the second period when he took a peek over at the clock and realized there was only ten seconds left. In what appeared to be a “flying squirrel” attempt, he left his feet, got his hands locked on a side headlock and tossed everything he had into one final attempt. Kinsinger rolled his Azeri opponent over his back and picked up four points. As the clock struck zero, he realized he punched Germany’s ticket to the Olympic Games at 67kg and let out a massive roar in excitement.

Although it wasn’t pretty by any means, Arvi SAVOLAINEN (FIN) got the job done at the end of the day and qualified Finland for the Olympic Games at 97kg.  Despite having two cautions against him and trailing 5-1 with less than a minute left, the Finnish wrestler stunned Nikoloz KAKHELASHVILI (ITA) with a four-point throw to earn the 5-5 criteria victory.

Savolaninen will take on ’18 world silver medalist Kiril MILOV (BUL) in the finals. Milov qualified Bulgarian for the Olympics after he walked to a 9-0 shutout win over Artur OMAROV (CZE), 9-0.

The Greco-Roman finals begin at 18:00 on Sunday and can be followed live on www.uww.org.