T.J. Dillashaw: ‘I’m ready to go straight for the belt’ 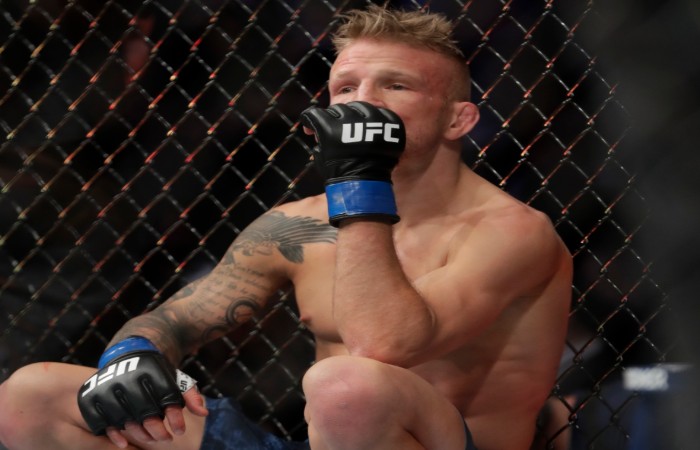 The UFC’s bantamweight division has become one of the deepest in all of MMA and former champion T.J. Dillashaw is ready to take a run at the new crop of contenders.

Should he get booked directly into a title shot, he’ll sign on for that opportunity too. Dillashaw, 35, has been out of action since January 2019, a result of a two-year USADA suspension stemming from a positive test for recombinant human erythropoietin (EPO). He admitted to using the banned substance prior to challenging Henry Cejudo for the flyweight title at UFC Brooklyn, where Cejudo defeated Dillashaw by 32-second TKO.

Dillashaw later relinquished the bantamweight belt that he held at the time.

In an interview on the Real Quick with Mike Swick podcast, Dillashaw spoke about returning from his long layoff and potentially facing the winner of the upcoming UFC 259 clash between current bantamweight champion Petr Yan and challenger Aljamain Sterling.

“Everyone’s gotta kind of wrap their head around coming back and getting back in there, but no, I’m ready to go straight for the belt,” Dillashaw said. “If that’s the opportunity that comes at me, because I know that Yan wants it, he’s already been vocally talking about it and we’ll see what happens on March 6 when he fights Sterling. He’s got a tough test ahead of him, but that’s the fight he wants. I feel like I didn’t leave this sport by losing my belt. He knows that there’s a lot of speculation if he’s the real champ because he hasn’t beaten the champion to get that belt, so he wants it. As well as that, I’m the biggest draw for him right now to try to fight.

Should Dillashaw have to fight his way back to the top, he welcomes that scenario as well. Prior to the Cejudo loss, Dillashaw was on a four-fight win streak and was in his second run as UFC bantamweight champion after reclaiming the title from Cody Garbrandt and then successfully defending against Garbrandt in an immediate rematch. That rematch took place in August 2018 and was the last time Dillashaw competed at 135 pounds.
According to Dillashaw, his return bout is still being negotiated, but he expects to have a big name opponent when everything is official.

“Every person that’s called me out, I’ve said yes to, to the UFC, so that’s just showing them that I’m eager to get back in there. It doesn’t really matter as long as it’s someone that’s at the top of the game, because I’m gonna climb up and get that belt back fast.”

Though there’s been much talk surrounding a potential Yan-Dillashaw fight, Yan’s next challenge is Sterling, a winner of five straight fights. Sterling earned his shot with a 88-second submission of Cory Sandhagen in June and Dillashaw thinks that the wrestling of “Funk Master” will make for a competitive title bout.

“I think it’s a tough fight for Yan because of the style of the fighter,” Dillashaw said. “I think Yan’s the better, well-rounded fighter. He’s got more of the skills in more aspects of fighting, but Sterling’s wrestling is really aggressive. His striking is real uncomfortable, he doesn’t really set anything up, he just kind of bombs kicks non-stop. Kind of got that distance, but then he grabs a hold of you, he’s got great wrestling and his jiu-jitsu is amazing as well. Watch him take Sandhagen out in 45 seconds. We’ve watched him do a lot of great grappling in some of his fights. So I think it will be a tough fight because I do think that maybe Yan’s biggest weakness is his wrestling. He lost in the past to a guy that’s in Bellator just by getting outwrestled. So we’ll see the gains that he’s made in his MMA wrestling.

“I would still probably put my money on Yan just ‘cause he’s a little more well-rounded structurally and technically on his feet. But you can’t underestimate a tough-nosed wrestler. He can’t be counting his chickens before they hatch because he’s trying to call me out, but he’s gotta get past Sterling and make sure he can stay on top.”

With names like Sandhagen, Garbrandt, Rob Font, Jose Aldo, Marlon Moraes, and Dominick Cruz, and Merab Dvalishvili occupying the top-15 of the official rankings, it could be a long wait for Dillashaw if he isn’t granted an immediate title shot.

He’s willing to wait and take on some fellow veterans before earning another crack at the belt, especially his former rival Cejudo if the Olympic gold medalist and former two-division UFC champion were to come out of retirement.

“I haven’t thought about a hit list exactly right, but yeah, he’s on it,” Dillashaw said when asked if a bout with Cejudo still interests him. “Just you saying his name it’s like, ‘Oh god,’ you know? ‘The King of Cringe’ did a good job of being cringey. It’s one of those fights that I was so much better going into that fight—Don’t take anything away from him. I think he’s an amazing athlete for winning an Olympic gold medal. I give him more credit for being an Olympic gold medalist than I do winning a UFC championship and that’s something because I’ve wrestled my whole life, that is quite amazing. But I’m so much of a better fighter than him well-rounded-wise.

“The way that his career worked out and the way that he stepped away from it was just like, he got so lucky. So that’s a fight that I want back because I don’t think he’s as good he thinks he is, so that’s for sure on my hit list. First and foremost, hit list for me, is just getting my belt back. Whatever path I have to take to get there, if it’s fighting all the guys in the top-five first, if it’s going straight to the belt, and then making sure I defend it and make a statement.”