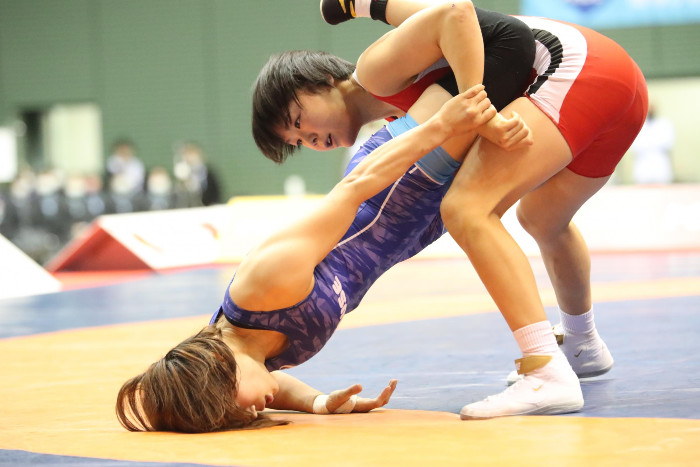 Teen phenom Akari FUJINAMI admits she’s an attention-seeker who likes to stand out in the crowd, enough so that it motivated her to do something quite surprising after winning a world title in her international senior debut.

Less than three months later, it looks like Fujinami will be having a long stay in the spotlight after capturing a second national title just a month after her 18th birthday.

Fujinami gave up a rare takedown, but was otherwise unchallenged as she cruised to the women’s 53kg title at the Emperor’s Cup All-Japan Championships with an 8-2 victory in the final over former world silver medalist Nanami IRIE on Sunday at Tokyo’s Komazawa Gym.

“To win the title, I’m happy as usual, but looking at how I did it, there were some rough parts that I’ll need to work on if I want to improve and get to where I want to be,” said Fujinami, who won the gold medal at October’s World Championships in Oslo with four straight technical fall victories and without surrendering a point.

Fujinami was one of three reigning world champions in action on the final day of the four-day tournament, which is serving as one of two domestic qualifiers for next year’s World Championships in Belgrade, as well as for the Asian Games in Hangzhou, China. The winners will also likely be selected for the Asian Championships, scheduled for April at a venue to be determined.

The results were mixed for the two other Oslo gold medalists, as Remina YOSHIMOTO managed to successfully defend her Emperor’s Cup crown at women’s 50kg, but Ken MATSUI went down to a humbling defeat in the Greco 55kg final.

Fujinami, who advanced to the final with a pair of 10-0 technical falls, capped her last tournament as a high schooler by extending a winning streak to 86 matches, dating back to her junior high school days in 2017.

Not that it matters to her. “The winning streak is in the past. I put more importance on now and what lies ahead,” Fujinami said.

To qualify for Oslo, Fujinami won her first-ever events on the senior level, last year’s Emperor’s Cup and this year’s Meiji Cup All-Japan Invitational Championships, the second qualifier for Japan’s world team held in May. She turned heads at both by handily defeating both Irie and two-time former world champion Haruna OKUNO.