Teofimo Lopez mocks Gervonta Davis for moving up in weight 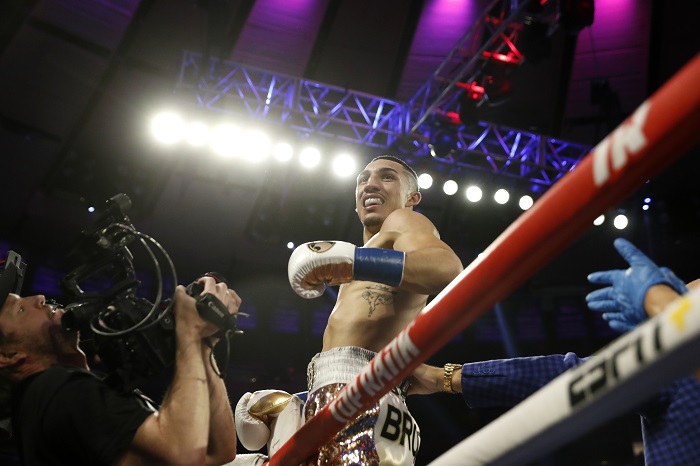 During this video interview with Fight Hub TV, Teofimo Lopez talks to Marcos Villegas of the recent reports that Gervonta Davis could move up to 140 lbs to take on Mario Barrios. In particular, Lopez shares some of his thoughts on why he sees a pattern of behavior with Davis and why think move to 140 might be out of necessity.

“It’ll be to say that he’s a three division world champion. I can see that happening. I could definitely see that…(laughs). Hey, good for him, man. Let him do what he gotta do. I think he’s too small at 140, but he’s fighting someone who is obviously some sort of champion. And yeah, I think it’ll be good for the sport, somewhat.”

“Everybody gotta see a pattern. A lot of people don’t catch onto patterns. WBA at 130, interim or silver or regular champion, then WBA regular champion at 135, and now they’re trying to go back to the WBA where they become the interim champion — or regular champion — with the WBA at 140 so he can say he’s a three division world champion. And it always looks better on a resume, then they try to get the fact that ‘oh, I should be on pound-for-pound list because of x, y, and z.’ So, yeah, I can see the pattern. Kudos to him, you gotta do what you gotta do my man.

“If they say it can happen at 140 then there you go, that’s right there — that could happen.”

On all the potential marquee matchups at 140

“Yeah, I think it’ll be great for boxing because a lot of people think that with his power and everything, with my power, that anybody, one punch could end the night for somebody…I don’t know about Davis though, I think why he’s going to 140 because he probably reached 190.

“I became undisputed, I got all the belts. And unlike some fighters and some people, they may go and celebrate, go on vacation and wait to get a fight. Nah, man. I don’t know what it was but when I accomplished that and the history behind it, not only did it humble me but it drove me even more…

“They all wanna be Mayweather and $100M dollars but look at Floyd. Floyd trained like he was broke…and he was still able to live his life and not blow up. So what’s their excuse? I’m just the truth, man. Just say it how it is.”