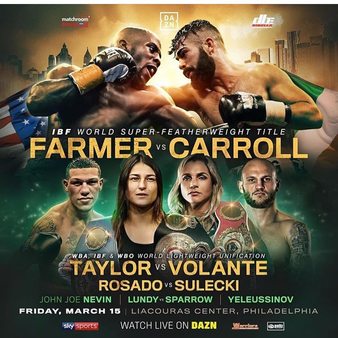 For the judges, it largely came down to a preference between Farmer’s accuracy and Carroll’s monstrous volume punching. Both guys fought hard for the full 12 rounds in an entertaining scrap aided by a strong and invested crowd, with there only being one really noticeable instance of someone being hurt, coming in the 11th round when Carroll had to fight to survive the frame.

There were a handful of swing rounds that could have gone either way. Judges appear to have seen them for the hometown fighter, giving him a decision that was wider on paper than the fight really was, but there’s no controversy about the winner.

“It was a good performance, but I always think I need to improve,” Farmer said after the fight. “He talked a lot, and he came and showed up, man. I got nothing but respect for him.”

Farmer was also, of course, asked about his longstanding media beef with WBA titleholder Gervonta “Tank” Davis, and he says he’s interested — for the right deal.

“I think we both should get fair money, life-changing money. Yes, I do want Gervonta Davis if the business is right.”