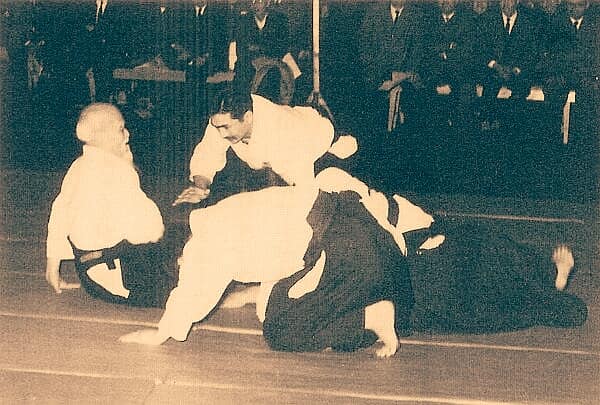 He met Morihei Ueshiba in 1936 (some English sources say 1935), around five years after the Manchurian Incident. Kano Jigoro would die at sea two years later, but multiple Judo students had already come to train with Morihei Ueshiba.

Bansen Tanaka was also a student of Ueshiba’s nephew, Noriyaki Inoue. Noriaki claimed the title of co-founder of Aikido. He had been raised in the Ueshiba home, and had been present for all of Takeda’s instruction from the beginning. Inoue was additionally a very devote Omoto Kyo believer, and he had also been present for the meeting of Onisaburo Deguchi and Morihei Ueshiba. He lived in the Omoto compound with the Ueshiba family. The second Omoto incident in 1935 led to the arrest of several Omoto leaders, but a police chief in Osaka was able to warn Morihei so that Morihei personally escaped arrest. Noriaki was critical of Morihei for not sharing the same fate as the Omoto Kyo leadership. The Inoue family was also very wealthy and had been the main financiers of Morihei’s adventures up until this point.

Eager to learn about aikido, Tanaka built a dojo for Inoue in Osaka, and he followed the teachings of both Noriaki and Morihei until he was drafted in 1939. The falling out of Inoue and Ueshiba worsened and the two eventually broke ties. Tanaka is still identified as a student of both men after the event that precipitated these two innovators separating.