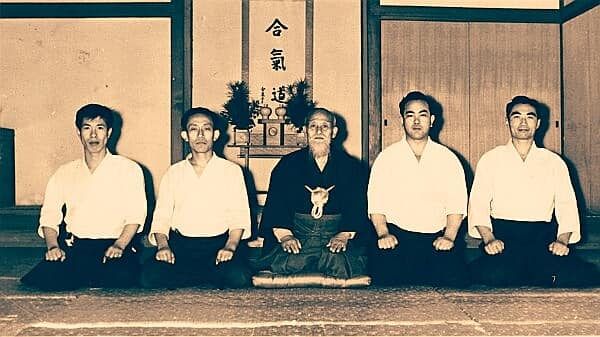 When Hiroshi Tada was twelve things became difficult because of the war. A short while after the topic came up again during the spring break at Waseda University Karate Club. There were talks about a famous master called Ueshiba. That Admiral Takeshita was a patron of his, and that he could throw foreign officers in the blink of an eye. Harada Mitsusuke and Oshima Tsutoto were also there when they talked about it. Mr Takeda, who was the captain at the time said: “Now that you mention it, a relative of mine did the illustrations for the book on Budo by Ueshiba-Sensei.” He said he could get him the dojo’s address if he was interested. It was is Wakamatsu 102. It was a short walk from Waseda University. ” When I was admitted it was not called Aikido yet, it was called “Aiki-Budo”. There was no official name. When I was a student at Waseda university, I wanted to create a club. Ueshiba Sensei started to give seminars at his dojo. I wanted to invite O Sensei to teach like that. But in order to advertise this we needed the name of a professor, so we asked Mr Tomiki. To call it “Aiki-Budo” was problematic because of the times, so I chose “Aikido”. But even before then it was called “Aikido”. Under the Butokukai, it was practiced in the section called “Aikido”.

When Mr Nocquet joined, I think I was in my mid 20s. Mr Nocquet was around 40. Before he came, Mr Mochizuki Minoru had been to France in 1951, invited by Sakurazawa Nyoichi. Over there he called himself “George Ohsawa”, the George Ohsawa of macrobiotics. It all started when Mr Mochizuki was invited to France by him. The year after, Abe Tadashi went. It was in 1952. At the beginning, M. Nocquet practiced Judo, and after he had mastered it, he started to practice with Abe Tadashi for several years. He found it amazing and decided to practice more and came to Japan, where he stayed for 3 or 4 years. After Mr Nocquet came, several Frenchmen started coming.”