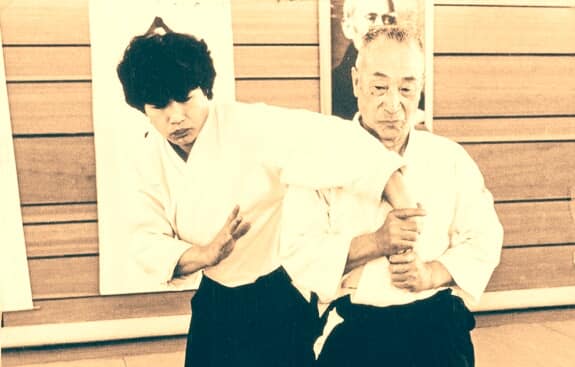 Shirata Sensei never reacted violently nor employed more force than it needed. Remember that a karateka under the pretext of learning Aikido attempted to deceive Shirata Sensei by kicking him instead of the classic direct hand blow to the head. Shirata Sensei stepped elegantly, laughed, and effortlessly threw him to the ground. In the early days there was no type of classification in dan and kyu; the Founder used the traditional system of giving students a certificate when he was satisfied with their progress.

Then there were four levels: 1) kirikami; 2) mokuroku; 3) menkyo; 4) kaiden. Shirata Sensei acquired mokuroku, the “catalog of techniques” and cannot say if someone else has obtained certificates of the highest degrees (“It was not my business” he says). However, it is doubtful that this happened, being difficult to imagine someone better than him.

In 1937 Shirata Sensei was called to arms and subsequently served as an officer in Manchuria and Burma. For a short period he was also a prisoner of war, before being repatriated in 1946. He never speaks of this experience – as all good teachers live in the present – except to say: “During the war we were told that Bushido means learning to I realized instead that this is not the real budo; the real budo is learning to live, live in peace and in harmony with others “. After a nine-year hiatus, Shirata Sensei resumed studying with the Founder in both Tokyo and Iwama. In 1949 he became an insurance agent, married and returned to the native district to raise three children and teach Aikido. Partly retired from business, Shirata Sensei was director of the All Japan Aikido Association, President of the Aikido International Journal Commission and Chief Instructor of Northern Japan. There is no better example of the healthful qualities of Aikido than Shirata Sensei. Even when he was in his seventies, his extraordinary physical vigor aroused the envy of those who were half his age.

Aikido, of course, is much more than physical culture; in fact it is used to say that the real practice of Aikido begins when one’s brute physical strength is in decline.

The Founder declared that he had not reached the sphere of Aikido essence until he was close to eighty. Since Shirata Sensei was increasingly based on the power of ki and on that of breathing, his techniques have gradually refined and have become more effective. Contrary to what happens in competitive sports, where at the age of forty it is for the most part already finished, in Aikido the growth of age can only bring about an improvement. Paradoxically, this vigor is not preserved by sparing it. Whenever Shirata Sensei implemented a technique, it was a shinken-shobu, a “deadly fight”. In other words, in Aikido meetings, every gram of physical and spiritual energy is concentrated on the “here” and the “now”.

If you put something aside, or get distracted in other thoughts, you don’t get any kind of progress. It has been said and repeated that ten minutes of training in complete concentration of body and spirit are worth more than ten hours of mechanically performed exercises. Hitting shots and throwing lunges is just one aspect of Aikido training; spending too much time in the dojo alters the necessary balance between practice, work, study and social obligations. In the same way as the Founder – who asserted: “I am still a beginner” – Shirata Sensei held back the enthusiasm of the new followers.

He once said :
“I’m finally starting to understand shiho-nage.”