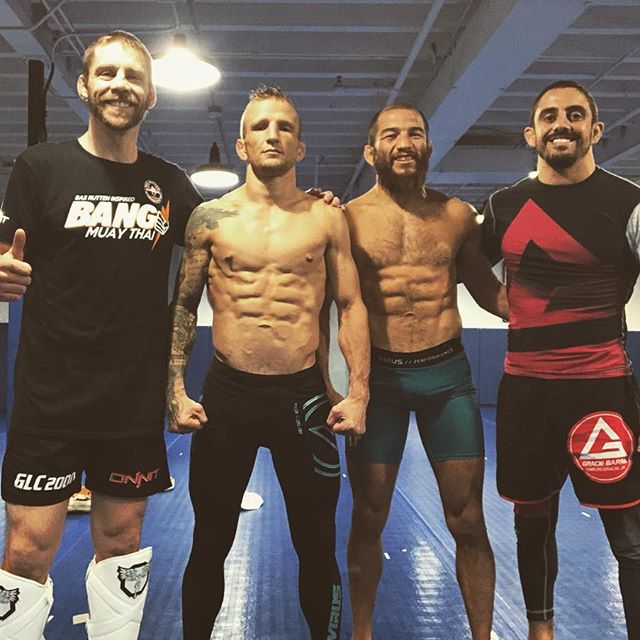 After suffering through a litany of injuries in training camp and during his UFC Vegas 32 fight with Cory Sandhagen, T.J. Dillashaw has only one thing on his mind for the future.

“I want my belt back,” Dillashaw told reporters after outpointing Sandhagen via split call on Saturday night. “It’s my belt. I want it back. I wasn’t impressed with [Aljamain Sterling and Petr Yan’s] last fight. I think Yan’s going to get the win [in the rematch]; Aljamain did not look very good, and that’s who I see fighting next.”

As MMA Fighting previously reported, Sterling and Yan have verbally agreed to rematch on Oct. 30 for UFC 267 in Abu Dhabi; Sterling captured the belt at UFC 259 via disqualification after he was unable to continue due to an illegal knee Yan landed.

Sterling on Saturday called for a fight with the winner, and Dillashaw emerged victorious after a two-plus year layofff due to an anti-doping suspension. The two-time UFC bantamweight champ was back in the win column for the first time since defending his belt in 2018 in a rematch against former teammate Cody Garbrandt.

Sandhagen was also a former training partner and gave Dillashaw all he could handle over five rounds. But Dillashaw also felt his performance was “a little lazy” and led to unnecessary damage, including a knee that popped when he hesitated on pulling his leg out of a submission attempt by Sandhagen in the first round.

“I’m happy with the performance – I got the win, but I can do a lot better than that,” Dillashaw said.

Dillashaw also suffered multiple injuries in training camp, he said, after a drama-free preparation for his first scheduled bout with Sandhagen at UFC Vegas 26 in May, which was moved back due to a cut he suffered in training.

“The May 8 camp went smooth – other than getting cut, I was able to spar,” Dillashaw said. “The second camp around, I could not stay healthy. The first injury was I pinched this nerve in my foot doing a slider board, and up until two days ago, I had to work out with shoes on. Then I tore my MCL in my right knee and hurt my left shoulder. So it was a real rough camp.

“I didn’t want to talk about it, because I didn’t want to make any excuses. I just needed to get out there. It was too f-in long. There was no way I was going to pull out from the fight.”

The cut that delayed the fight was opened up again on Saturday night, leaving a gash that required multiple stitches to close. It was all worth it to Dillashaw, who arrived at the UFC APEX looking to shrug off the demons of his recent past by putting on a good performance for his family and friends – not the critics who called him a cheater.

Dillashaw, though, also admitted it was important to show the world he could fight without the performance-enhancing drug recombinant human erythropoietin (EPO) that derailed his career more than two years ago.

“I wanted to make sure everyone saw that cardio,” he said with a smile.

If it’s February or March until he fights again, Dillashaw said he’d gladly wait for his title shot. He also welcomed the idea of serving as a backup on Fight Island in case Sterling or Yan were unable to make the fight. Any opportunity to get his belt back is a good one.

As for vindication, Dillashaw said wasn’t seeking it.

“I’ve done what I’ve done for myself and for my family,” he said. “I’m happier that my son got to watch me win tonight. I forgot to give him a shoutout on the mic afterward, and I’m regretting that, but I could care less what anyone else thinks. If you care what anyone else thinks about you in this world, you’re doing the wrong things.”