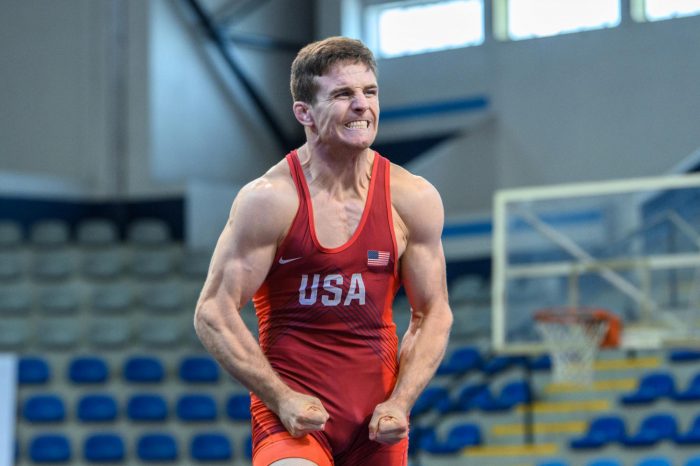 The United States wrestling team was expected to make waves at the 2020 Olympic games and the athletes absolutely delivered.

When wrestling competition ended on Saturday, the U.S. team had captured a total of nine medals, which was tops for any country in the Olympics. Russia finished second with eight total medals while Japan closed the games with seven medals.

In the final day of wrestling, 2016 gold medalist Kyle Snyder captured a silver medal after losing a heartbreaking match against the Russian tank Abdulrashid Sadulaev by a final score of 6-3. Sadulaev has been considered Snyder’s biggest rival ever since he decided to move up to 97kg after winning gold at the 2016 games at 86kg.

While Snyder was able to vanquish Sadulaev in their first meeting at the World Championships, the Russian has powered back to win the last two in a row with this latest victory making him a two-time Olympic gold medalist.

Snyder was offensive minded from the start of the gold medal match but despite getting deep on several single-leg takedown attempts, he just wasn’t able to power through or put Sadulaev down, which then allowed the powerful Russian to earn points on exposure. Late in the match, Snyder was able to close the gap in the overall scoring but he ran out of time before accumulating enough to overtake Sadulaev, who hadn’t given up a point during the 2020 games until he faced the American.

Meanwhile, Sarah Hildebrandt captured the final medal for the United States when she won bronze with a dominant 12-1 win over Oksana Livach from Ukraine.

Overall, the 2020 Olympics has to be seen as one of the most successful years for U.S. wrestling with every competitor from the men’s freestyle team capturing a medal including a pair of golds from heavyweight phenom Gable Steveson and former Penn State standout David Taylor

Steveson managed to pull off one of the greatest victories in the history of American wrestling at the Olympics after he earned a takedown with less than one-second remaining to win gold over Georgia’s Geno Petriashvili. An NCCA champion from the University of Minnesota, Steveson still has eligibility left to return to college, although he hasn’t announced his plans after winning the gold medal.

Following a dominant run through his first three matches, Taylor also had to pull off some last second heroics to capture his gold medal as “The Magic Man” finally accomplished his dream of winning at the Olympics. Taylor was one of the biggest favorites from the U.S. to win gold but he still had to gut his way through a last match to go home at the top of the 86kg category.

At the end of competition, Taylor and Steveson were the Americans with gold medals, Snyder had the only Silver with Kyle Dake and Thomas Gilman capturing bronze.

Adeline Gray took home a silver medal as she further cemented herself as one of the greatest women’s wrestlers in American history while Hildebrandt and Helen Maroulis both took home bronze medals.

With her bronze, Maroulis also became the first American woman to ever capture multiple medals in wrestling after she won the gold in 2016.

The nine total medals claimed by the United States is the second most ever captured at a single Olympics for the American team behind only the 1984 squad with 13 after they competed in Los Angeles. Those games did not include any Russian wrestlers after they boycotted the 1984 Olympics.

All told, the U.S. team has to be thrilled with the outcome of the 2020 games, especially with the men’s team capturing a medal in every single division. There won’t be much time to celebrate because the 2021 World Championships of wrestling will kick off in October in Norway.